Robert's Rules of Order: A Simplified, Updated Version of the Classic Manual of Parliamentary Procedure (Paperback) 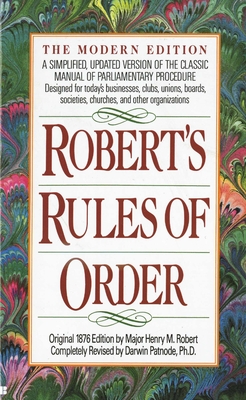 By Henry M. Robert
Email or call for price.
Not Currently Available Through Reach and Teach

Henry M. Robert published his first Robert’s Rules of Order in 1876, and literally within days of its printing, began making changes for future printings.

Now, a professional parliamentarian has continued this tradition by updating Robert’s classic manual for today’s needs. Easy to read, understand, and apply, this new edition eliminates outdated footnotes and cross-references. It focuses on typical organizational meetings and includes a unique chart for beginners as well as experts. It is the essential tool for organizations of every type and size—a classic guide designed especially for modern readers.

Henry M. Robert (1837–1923) was a military engineer. His book Robert's Rules of Order (also known as Pocket Manual of Rules of Order for Deliberative Assemblies) became the most widely used manual of parliamentary procedure to this day in the United States. During the Civil War, Robert worked on the defenses of Washington, DC, Philadelphia, and several ports in New England. He served as the president of the Board of Engineers from 1895 to 1901. Upon his retirement he was appointed chief of engineers.