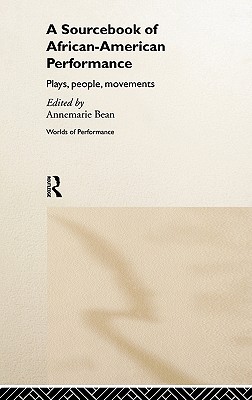 By Annemarie Bean (Editor)
Email or call for price.

A Sourcebook on African-American Performance is the first volume to consider African-American performance between and beyond the Black Arts Movement of the 1960s and the New Black Renaissance of the 1990s.
As with all titles in the Worlds of Performance series, the Sourcebook consists of classic texts as well as newly commissioned pieces by notable scholars, writers and performers. It includes the plays 'Sally's Rape' by Robbie McCauley and 'The American Play' by Suzan-Lori Parks, and comes complete with a substantial, historical introduction by Annemarie Bean.
Articles, essays, manifestos and interviews included cover topics such as:
* theatre on the professional, revolutionary and college stages
* concert dance
* community activism
* step shows
* performance art.
Contributors include Annemarie Bean, Ed Bullins, Barbara Lewis, John O'Neal, Glenda Dickersun, James V. Hatch, Warren Budine Jr. and Eugene Nesmith.