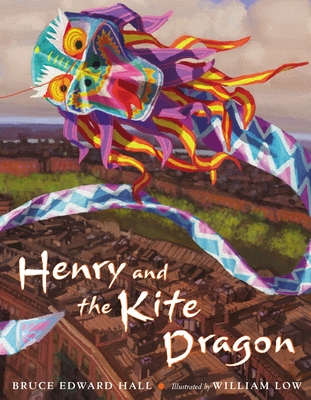 Everyone knows that kids from Chinatown don't go to the park when the kids from Little Italy are there. They're rough, they're big, and they don't like Chinese kids. That's okay-Henry doesn't like them, either.

But what Henry does like are kites. He loves them. Even more, he loves to help his friend Grandfather Chin make them, and fly them over Chinatown and the park. But when Tony Guglione and his friends from Little Italy keep throwing rocks and destroying their beautiful creations, Henry and his friends decide enough is enough!

In this touching story based on true 1920's events, two rival groups of children representing two different cultures come face to face, and when they do, they find they share much more than just the same sky.

Bruce Edward Hall, a fourth-generation Chinese American, is the author of Tea That Burns: A Family Memoir of Chinatown, as well as other books. His articles have appeared in The New York Times, New York magazine, and American Heritage, among others. Besides his writing career, Mr. Hall also served as the head puppeteer on the televsion show Romper Room, and a principal puppeteer in The Muppets Take Manhattan. Mr. Hall lives in New York City.

William Low is a first-generation Chinese American who grew up in the Bronx. A graduate of Parsons School of Design, Mr. Low has studied in Paris and teaches at the School of Visual Arts in New York City. His beautiful work has been exhibited at galleries and museums, including the Society of Illustrators, the Museum of the City of New York, and the American Museum of Folk Art. Mr. Low lives in Huntington, New York.

“Hall’s story, based [on] an incident in his father’s life, subtly teaches that bigotry and hatred is often based in ignorance. Low fills his pages with vibrant, glowing color for the kites and expressive faces that allow the reader to feel the passion, fear, and finally acceptance of the characters. An excellent resource for teaching diversity—and a little urban history as well.—Kirkus Reviews, starred review