The Thin Light of Freedom: The Civil War and Emancipation in the Heart of America (Paperback) 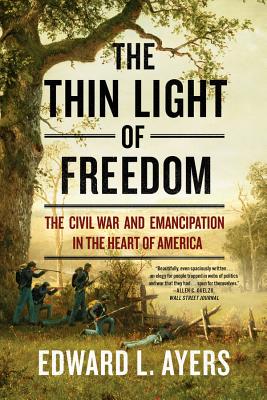 Winner of the Lincoln Prize

At the crux of America’s history stand two astounding events: the immediate and complete destruction of the most powerful system of slavery in the modern world, followed by a political reconstruction in which new constitutions established the fundamental rights of citizens for formerly enslaved people. Few people living in 1860 would have dared imagine either event, and yet, in retrospect, both seem to have been inevitable.

In a beautifully crafted narrative, Edward L. Ayers restores the drama of the unexpected to the history of the Civil War. From the same vantage point occupied by his unforgettable characters, Ayers captures the strategic savvy of Lee and his local lieutenants, and the clear vision of equal rights animating black troops from Pennsylvania. We see the war itself become a scourge to the Valley, its pitched battles punctuating a cycle of vicious attack and reprisal in which armies burned whole towns for retribution. In the weeks and months after emancipation, from the streets of Staunton, Virginia, we see black and white residents testing the limits of freedom as political leaders negotiate the terms of readmission to the Union. With analysis as powerful as its narrative, here is a landmark history of the Civil War.

Edward L. Ayers’s The Thin Light of Freedom completes his prize-winning history of the Civil War and its aftermath in the Great Valley that began with In the Presence of Mine Enemies. Ayers’ superb history has been awarded the Bancroft Prize, the Lincoln Prize, and the Avery O. Craven Award of the Organization of American Historians. A recipient of the National Humanities Medal from President Obama, Ayers is the Tucker-Boatwright Professor of the Humanities and president emeritus of the University of Richmond.

Ayers set out to re-create the lived experience of the Civil War—for Northerners and Southerners, blacks and whites, men and women, soldiers and civilians—without losing sight of the political turmoil and destructive violence that affected all of them. In that he has succeeded brilliantly.
— James Oakes - Washington Post

Beautifully, even spaciously, written,… [The Thin Light of Freedom is] an elegy for people trapped in webs of politics and war that they had, for the most part, spun for themselves.

It’s through these individual stories that Ayers’s book achieves its most gripping reading stretches, dramatizing as few recent books have done the dual, entwined wars taking place in the years it chronicles—one a war of soldiers and battlefields, the other a war of social justice and the fight to enlarge the promise of liberty.… The Thin Light of Freedom gathers the stories of all these different aspects of the war’s final years and transmutes them into a dark and oddly uplifting tale of the forging of modern America.

Ayers tells multiple stories in The Thin Light of Freedom. Painting with a broad brush, he sketches a vast canvas—the bloodiest conflict in the Western world between 1815 and 1914. But the two localities in the Great Valley remain his principal focus.… Featured individuals carry Ayers’ narrative.… Soldiers and civilians, men and women, free and slave, white and black, the prominent and the obscure—all found themselves caught in an extraordinary, dangerous, and unpredictable maelstrom. Edward Ayers displays a… keen eye for moral complexity. His achievement will endure.

Luminous.… An exemplary contribution to the history of the Civil War and its aftermath.
— Kirkus Reviews (starred review)

Ayers focuses on the thoughts, fears, and hopes of normal people struggling to stay alive and make sense of the murderous events taking place around them. The result is a superb, readable work of history.
— Publishers Weekly (starred review)

Edward Ayers masters a unique combination of detailed, granular, profoundly human social history with an extraordinary skill at narrative and a rare humility. This is the brilliant, long-awaited exclamation mark for the Valley of the Shadow.
— David W. Blight, author of Frederick Douglass: Prophet of Freedom