"What Do You Care What Other People Think?": Further Adventures of a Curious Character (Paperback) 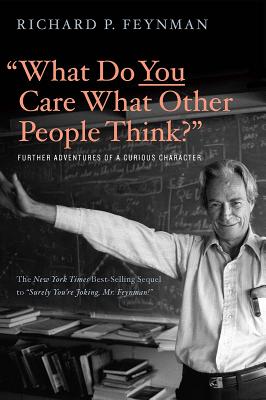 Here we meet Feynman’s first wife, Arlene, who taught him of love’s irreducible mystery as she lay dying in a hospital bed while he worked on the atomic bomb at nearby Los Alamos. We listen to the fascinating narrative of the investigation into the space shuttle Challenger’s explosion in 1986 and relive the moment when Feynman revealed the disaster’s cause through an elegant experiment: dropping a ring of rubber into a glass of cold water and pulling it out, misshapen. In "What Do You Care What Other People Think?" one of the greatest physicists of the twentieth century lets us see the man behind the genius.

Richard P. Feynman (1918–1988) was a professor at Cornell University and CalTech and received the Nobel Prize for physics in 1965. In 1986 he served with distinction on the Rogers Commission investigating the space shuttle Challenger disaster.

One final, welcome jolt from Mr. Feynman…There are a great many things for all of us in this book.
— Peter Gorner - Chicago Tribune

There is nothing obtuse or difficult about [this] book. Indeed, Feynman’s rendering of such a potentially complex subject as the Challenger disaster is straightforward, lucid, and accessible.

One of the greatest minds of the twentieth century…[He] was also stubborn, irreverent, playful, intensely curious and highly original in practically everything he did.
— New York Review of Books

A gentler book [than “Surely You’re Joking, Mr. Feynman!”], and for those interested in the man, a more substantial one.