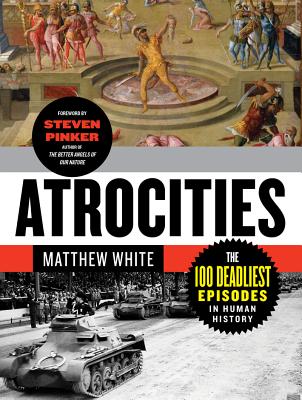 Evangelists of human progress meet their opposite in Matthew White’s epic examination of history’s one hundred most violent events, or, in White’s piquant phrasing, “the numbers that people want to argue about.” Reaching back to the Second Persian War in 480 BCE and moving chronologically through history, White surrounds hard facts (time and place) and succinct takeaways (who usually gets the blame?) with lively military, social, and political histories.

Matthew White is the creator of the online Historical Atlas of the 20th Century. His data has been cited by forty-five published books and eighty scholarly articles. He lives in Richmond, Virginia.

Steven Pinker is a Johnstone Family Professor in the Department of Psychology at Harvard University. He conducts research on language and cognition; writes for publications such as the New York Times, Time, and The Atlantic; and is the author of ten books, including The Language Instinct, How the Mind Works, The Blank Slate, The Stuff of Thought, The Better Angels of Our Nature, and The Sense of Style: The Thinking Person's Guide to Writing in the 21st Century.

[White] doesn’t take sides so much as report the facts—and the death tolls. . . . Full of fascinating information about parts of the world little-known to most Westerners.
— Washington Post

White . . . gives voice to the suffering of ordinary people that, inexorably, has defined every historical epoch.
— Military Review

A fascinating read thanks to White’s keen grasp of history and his wry take on the villains of the past.
— Christian Science Monitor