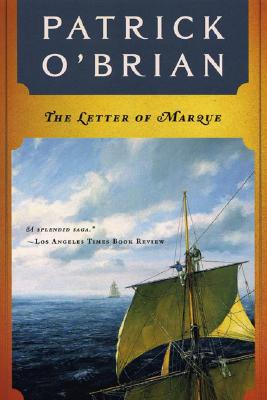 This is book number 12 in the Aubrey/Maturin Novels series.

Captain Jack Aubrey, a brilliant and experienced officer, has been struck off the list of post-captains for a crime he did not commit. His old friend Stephen Maturin, usually cast as a ship's surgeon to mask his discreet activities on behalf of British Intelligence, has bought for Aubrey his former ship the Surprise to command as a privateer, more politely termed a letter of marque. Together they sail on a desperate mission against the French, which, if successful, may redeem Aubrey from the private hell of his disgrace.

The Letter of Marque is both serious and light-hearted, true and sentimental, as comic opera can be.

[Patrick O'Brian has] the power of bringing near to the reader...savagery and tenderness, beauty and mystery and boldness and dignity.
— Eudora Welty

The best historical novels ever written… On every page Mr. O’Brian reminds us with subtle artistry of the most important of all historical lessons: that times change but people don’t, that the griefs and follies and victories of the men and women who were here before us are in fact the maps of our own lives.
— Richard Snow - New York Times Book Review

It has been something of a shock to find myself—an inveterate reader of girl books—obsessed with Patrick O’Brian’s Napoleonic-era historical novels… What keeps me hooked are the evolving relationships between Jack and Stephen and the women they love.
— Tamar Lewin - New York Times

I devoured Patrick O’Brian’s 20-volume masterpiece as if it had been so many tots of Jamaica grog.
— Christopher Hitchens - Slate

I fell in love with his writing straightaway, at first with Master and Commander. It wasn’t primarily the Nelson and Napoleonic period, more the human relationships. …And of course having characters isolated in the middle of the goddamn sea gives more scope. …It’s about friendship, camaraderie. Jack Aubrey and Stephen Maturin always remind me a bit of Mick and me.

[O’Brian’s] Aubrey-Maturin series, 20 novels of the Royal Navy in the Napoleonic Wars, is a masterpiece. It will outlive most of today’s putative literary gems as Sherlock Holmes has outlived Bulwer-Lytton, as Mark Twain has outlived Charles Reade.
— David Mamet - New York Times

The Aubrey-Maturin series… far beyond any episodic chronicle, ebbs and flows with the timeless tide of character and the human heart.
— Ken Ringle - New York Times

Gripping and vivid… a whole, solidly living world for the imagination to inhabit.
— A. S. Byatt

There is not a writer alive whose work I value over his.
— Stephen Becker - Chicago Sun-Times