The Source: How Rivers Made America and America Remade Its Rivers (Hardcover) 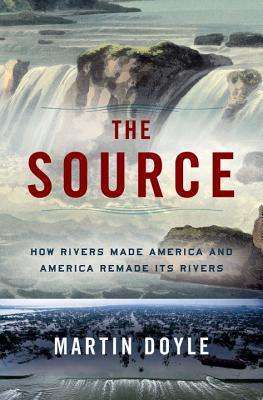 An Amazon Best Book of the Year

How rivers have shaped American politics, economics, and society from the beginnings of the Republic to today.

America has more than 250,000 rivers, coursing over more than 3 million miles, connecting the disparate regions of the United States. On a map they can look like the veins, arteries, and capillaries of a continent-wide circulatory system, and in a way they are. Over the course of this nation’s history rivers have served as integral trade routes, borders, passageways, sewers, and sinks. Over the years, based on our shifting needs and values, we have harnessed their power with waterwheels and dams, straightened them for ships, drained them with irrigation canals, set them on fire, and even attempted to restore them.

In this fresh and powerful work of environmental history, Martin Doyle tells the epic story of America and its rivers, from the U.S. Constitution’s roots in interstate river navigation, the origins of the Army Corps of Engineers, the discovery of gold in 1848, and the construction of the Hoover Dam and the TVA during the New Deal, to the failure of the levees in Hurricane Katrina and the water wars in the west. Along the way, he explores how rivers have often been the source of arguments at the heart of the American experiment—over federalism, sovereignty and property rights, taxation, regulation, conservation, and development.

Through his encounters with experts all over the country—a Mississippi River tugboat captain, an Erie Canal lock operator, a dendrochronologist who can predict the future based on the story trees tell about the past, a western rancher fighting for water rights—Doyle reveals the central role rivers have played in American history—and how vital they are to its future.

Martin Doyle is director of the Water Policy Program at the Nicholas Institute for Environmental Policy Solutions and a professor of river science and policy at Duke University’s Nicholas School of the Environment. He lives in North Carolina.

Original [and] poignant. . . . [T]ells the story of how rivers have shaped the United States from its founding.
— Robert Glennon - New York Times Book Review

An original and thought-provoking exploration of the sinuous course that water has carved through our economic and political landscape.
— Gerard Helferich - Wall Street Journal

In [Doyle’s] telling, rivers become a lens on federalism, energy and conservation—a rolling narrative taking us from George Washington's quest to find a passage from the Atlantic Ocean to the Ohio River, through decades of levee-building, flood control, water wars and much more.
— Nature

Authoritative…Even readers with an allergy to learning history will come away with a greater understanding of how rivers have literally made our country.
— Tracy Ross - Outside Magazine

A vigorous look at American history through the nation’s waterways…Doyle speaks well to issues that are as pressing today as in the first years of the republic.
— Kirkus Reviews

Readers interested in everything from American history to business, engineering, environmental concerns, and canoeing will find Doyle’s work absorbing and educational.
— Booklist

Just like its topic, The Source flows magnificently from end to end, carving out a story that spans a continent and several centuries. Martin Doyle weaves together a gripping mix of American history, geology, engineering, economics, and politics to show that American rivers are one of the inspirations of the constitution, the connective fabric of our industry, a triggering cause of environmental movements, and a source of power—physical, economic, and political.

Brilliantly conceived, The Source is a unique synthesis that recasts American history and flows with the power of unexpected insight.

Move over Cadillac Desert and The Last Oasis; a new classic on American rivers has arrived. One of the world’s leading authorities on hydrology, Martin Doyle shows how rivers have served as the arteries and veins of the United States since the country’s very founding. It is a rich history both impressive and unsettling.