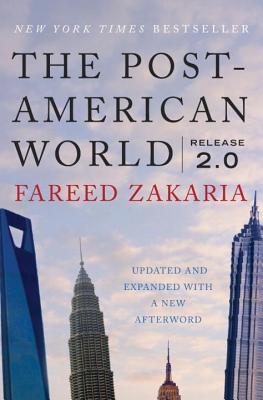 The New York Times bestseller, revised and expanded with a new afterword: the essential update of Fareed Zakaria's international bestseller about America and its shifting position in world affairs.

Fareed Zakaria’s international bestseller The Post-American World pointed to the “rise of the rest”—the growth of countries like China, India, Brazil, and others—as the great story of our time, the story that will undoubtedly shape the future of global power. Since its publication, the trends he identified have proceeded faster than anyone could have anticipated. The 2008 financial crisis turned the world upside down, stalling the United States and other advanced economies. Meanwhile emerging markets have surged ahead, coupling their economic growth with pride, nationalism, and a determination to shape their own future.

In this new edition, Zakaria makes sense of this rapidly changing landscape. With his customary lucidity, insight, and imagination, he draws on lessons from the two great power shifts of the past 500 years—the rise of the Western world and the rise of the United States—to tell us what we can expect from the third shift, the “rise of the rest.” The great challenge for Britain was economic decline. The challenge for America now is political decline, for as others have grown in importance, the central role of the United States, especially in the ascendant emerging markets, has already begun to shrink. As Zakaria eloquently argues, Washington needs to begin a serious transformation of its global strategy, moving from its traditional role of dominating hegemon to that of a more pragmatic, honest broker. It must seek to share power, create coalitions, build legitimacy, and define the global agenda—all formidable tasks.

None of this will be easy for the greatest power the world has ever known—the only power that for so long has really mattered. America stands at a crossroads: In a new global era where the United States no longer dominates the worldwide economy, orchestrates geopolitics, or overwhelms cultures, can the nation continue to thrive?

Fareed Zakaria is the host of CNN’s flagship international affairs show, Fareed Zakaria GPS, as well as weekly columnist for the Washington Post, and the best-selling author of The Post-American World and The Future of Freedom.

Starred Review. Zakaria updates his best-selling earlier vision of world economics and politics, which foresaw the decline of American dominance but reassured us that with that decline came the rise of the rest of the world.
— Booklist

This is a relentlessly intelligent book that eschews simple-minded projections from crisis to collapse.
— Joseph Joffe - The New York Times Book Review

Zakaria . . . may have more intellectual range and insights than any other public thinker in the West.
— Boston Sunday Globe

A provocative and often shrewd take that opens a big picture window on the closing of the first American century and the advent of a new world.
— Michiko Kakutani - The New York Times

Fareed Zakaria is one of the most thoughtful foreign policy analysts of our day and his new book . . . is a must read for anyone interested in globalization—or the Presidential election.
— Bruce Nussbaum - BusinessWeek

Compelling.
— Thomas Friedman, author of The World is Flat