Incompleteness: The Proof and Paradox of Kurt Godel (Hardcover) 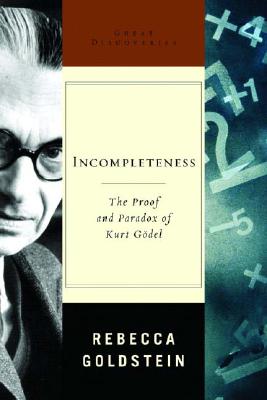 By Rebecca Goldstein
$22.95
Email or call for price.

KURT GODEL IS CONSIDERED the twentieth century's greatest mathematician. His monumental theorem of incompleteness overturned the prevailing conviction that the only true statements in math were those that could be proved. Inspired by Plato's philosophy of a higher reality, Godel demonstrated conclusively that there are in every formal system undeniably true statements that nevertheless cannot be proved. The result was an upheaval in mathematics. From the famous Vienna Circle and sparring with Wittgenstein to Princeton's Institute for Advanced Study, where he was Einstein's constant companion. Godel was both a towering intellect and a deeply mysterious figure, whose strange habits and ever-increasing paranoia led to his sad death by self-starvation. In this lucid and accessible study, Rebecca Goldstein, a philosopher of science and a gifted novelist whose work often focuses on science, explains the significance of Godel's theorems and the remarkable vision behind them, while bringing this eccentric, tortured genius and his world to life.