Deadly Monopolies: The Shocking Corporate Takeover of Life Itself--And the Consequences for Your Health and Our Medical Future. (Hardcover) 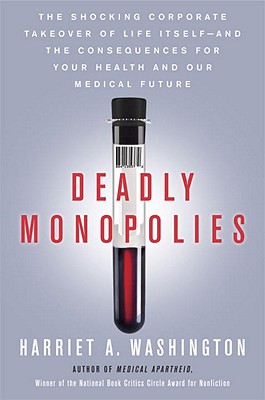 From the award-winning author of Medical Apartheid, an exposé of the rush to own and exploit the raw materials of life—including yours.

Think your body is your own to control and dispose of as you wish? Think again. The United States Patent Office has granted at least 40,000 patents on genes controlling the most basic processes of human life, and more are pending. If you undergo surgery in many hospitals you must sign away ownership rights to your excised tissues, even if they turn out to have medical and fiscal value. Life itself is rapidly becoming a wholly owned subsidiary of the medical- industrial complex.

Deadly Monopolies is a powerful, disturbing, and deeply researched book that illuminates this “life patent” gold rush and its harmful, and even lethal, consequences for public health. It examines the shaky legal, ethical, and social bases for Big Pharma’s argument that such patents are necessary to protect their investments in new drugs and treatments, arguing that they instead stifle the research, competition, and innovation that can drive down costs and save lives. In opposing the commodification of the body, Harriet Washington provides a crucial human dimension to an often all-too-abstract debate.

Like the bestseller The Immortal Life of Henrietta Lacks, Deadly Monopolies reveals in shocking detail just how far the profit motive has encroached in colonizing human life and compromising medical ethics. It is sure to stir debate—and instigate change.

Harriet A. Washington is the author of "Medical Apartheid," which won a National Book Critics Circle Award, the 2007 PEN Oakland Award, and the 2007 American Library Association Black Caucus Nonfiction Award. She has been a fellow in medical ethics at the Harvard Medical School, a senior research scholar at the National Center for Bioethics at Tuskegee University, a fellow at the Harvard School of Public Health, and the recipient of a John S. Knight Fellowship at Stanford University.


"Deadly Monopolies explores contentious issues in modern biomedical research that have been aggravated by the field’s commercial emphasis.....Though she is not the first to raise many of these concerns, Washington offers an overarching framework that enables readers to see connections that are often obscured. The book’s brilliance lies in the compassionately told narratives of individuals whose lives have been affected by the increasing corporate control of scientific research. Rather than simply writing another book about biomedical wrongdoing, Washington with her journalistic approach provides a more humane account of the problems tied to the for-profit nature of today’s research industry. In doing this, Washington accomplishes what has thus far escaped previous authors. She makes the case for a broader political consciousness of science and technology....This is precisely the conversation an important book starts in order to challenge readers to see the world differently so that they connect the disparate dots. Deadly Monopolies is an extraordinary achievement in this and many other regards."—Osagie K. Obasogie, The American Prospect


"A searing look at the medical-industrial complex and its ability to patent genes and other biological products, resulting in an opportunistic and powerful pharmaceutical industry that often ignores the most pressing global-health issues in order to make a profit.

National Book Critics Circle Award winner Washington (Medical Apartheid: The Dark History of Medical Experimentation on Black Americans from Colonial Times to the Present, 2007, etc.) begins with the controversial 1980 Bayh-Dole Act, which allowed the commercialization of medical inventions based on government-funded patents, including those on living things. As a result, an unprecedented collusion between universities, researchers and private pharmaceutical and biotechnology companies spawned an era in which many vital medicines are too expensive or inaccessible to average consumers, or rushed to market before being adequately tested. Despite the fact that taxpayers largely fund medical research and development, pharma companies include that cost in their purported expenses, therefore using disingenuous figures to justify the skyrocketing costs of patented drugs. The author adeptly details the wide-ranging repercussions of this monopolistic research model and recounts chilling anecdotes that reveal a pattern of shady practices by biotech and pharma companies. These firms often display a lack of respect for patients' rights in a ruthless pursuit of "blockbuster" drugs without regard for helping those who need it most. As of 2009, only 10 percent of the more than $70 billion spent per year on medical research addresses “diseases that cause 90 percent of the world's health burden.” In addition, minorities and poor populations are often exploited for their genetic material yet not compensated for their contribution. Thousands of people die from preventable causes simply because it's not profitable to save them. The author clearly presents data to elucidate these complex issues, and cogently argues that there are opportunities to reinstate transparency, collaboration and altruism in drug development and disbursement.


“Harriet Washington has written an important and compelling book.  She shows how recent changes in patent law have caused drug prices to soar, while reducing innovation by drug companies to near-zero.  Well-documented, yet highly readable, the book paints a vivid picture of an industry that now exploits monopoly rights to patients' genes, and relies on taxpayer-funded NIH research for its few novel and important drugs—even as it turns out an endless stream of trivial variations of top-selling old drugs.”
—Marcia Angell, M.D., author of The Truth About the Drug Companies and former editor of the New England Journal of Medicine


“Big Pharma is not going to like Deadly Monopolies one bit, but you probably will—especially if, like most Americans, you’re finding the co-pay on your drugs too much to handle. Washington correctly reminds us that, as hard as high drug costs are in the USA, they are lethal for the world’s poor. Brava Harriet Washington!”
—Laurie Garrett, Pulitzer Prize-winning writer and author of I Heard the Sirens Scream: How Americans Responded to the 9/11 and Anthrax Attacks


“Patents, we’re repeatedly told, are crucial to fostering innovation. Deadly Monopolies reveals how the privatization of medical science is retarding research, putting patients at risk, and making what cures we have exorbitantly expensive. This book is a meticulously documented exposé of what’s gone wrong with our medical innovation system, and a roadmap for change.”
—Merrill Goozner, author of The $800 Million Pill: The Truth Behind The Cost of New Drugs

“An important book. The disgraceful history it details is a reminder that people in power have always been capable of exploiting those they regard as ‘other.’”
—New York Times

“A fresh account of the Tuskegee study, including new information, lies at the center of Harriet A. Washington’s courageous and poignant book. Washington sheds light on how our understanding of what constitutes medical research requires broadening in the face of new developments in genetic science.”
—Washington Post Book Review

“Medical Apartheid is fascinating and compelling . . . The book’s analysis challenges the reader to question established paradigms in the history of medicine.
—Dr. Marius Turda, Oxford Brookes University, in Social History of Medicine

“Groundbreaking . . . Washington is a great storyteller, and in addition to giving us an abundance of information on ‘scientific racism’ the book, even at its most distressing, is compulsively readable . . . Paints a powerful and disturbing portrait of medicine, race, sex, and the abuse of power.”
—Publishers Weekly (starred review)

“One of [Washington’s] goals in writing this book, aside from documenting a shameful past, is to convince [African Americans] that they must participate actively in therapeutic medical research . . . while remaining ever alert to possible abuses . . . Sweeping and powerful.”
—Kirkus Reviews (starred review)