The Birth of Tragedy & The Genealogy of Morals (Paperback) 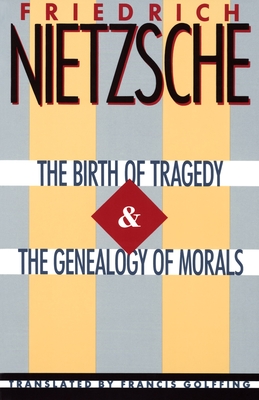 Skillful, sophisticated translations of two of Nietzsche's essential works about the conflict between the moral and aesthetic approaches to life, the impact of Christianity on human values, the meaning of science, the contrast between the Apollonian and Dionysian spirits, and other themes central to his thinking.

The Birth of Tragedy (1872) was Nietzsche's first book, The Geneology of Morals  (1887) one of his last.  Though they span the career of this controversial genius, both address the problems such as the conflict between the moral versus aesthetic approaches to life, the effect of Christianity on human values, the meaning of science, and the famous dichotomy between the Apollonian and Dionysian spirits, among many themes which Nietzsche struggled throughout his tortured life.

Friedrich Nietzsche was born in 1844 in Röcken (Saxony), Germany.  He studied classical philology at the universities of Bonn and Leipzig, and in 1869 was appointed to the chair of classical philology at the University of Basel, Switzerland. Ill health led him to resign his professorship ten years later.  His works include The Birth of Tragedy, Thus Spoken Zarathustra, Beyond Good and Evil, On the Genealogy of Morals, The Case of Wagner, Twilight of the Idols, the Antichrist, Nietzsche contra Wagner, and Ecce Homo. He died in 1900.  The Will to Power, a selection from his notebooks, was published posthumously.