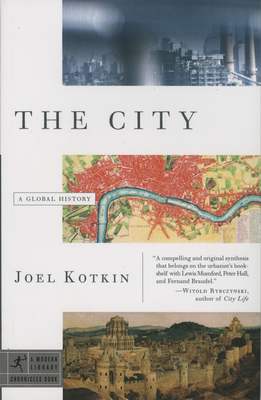 If humankind can be said to have a single greatest creation, it would be those places that represent the most eloquent expression of our species’s ingenuity, beliefs, and ideals: the city. In this authoritative and engagingly written account, the acclaimed urbanist and bestselling author examines the evolution of urban life over the millennia and, in doing so, attempts to answer the age-old question: What makes a city great?

Despite their infinite variety, all cities essentially serve three purposes: spiritual, political, and economic. Kotkin follows the progression of the city from the early religious centers of Mesopotamia, the Indus Valley, and China to the imperial centers of the Classical era, through the rise of the Islamic city and the European commercial capitals, ending with today’s post-industrial suburban metropolis.

Despite widespread optimistic claims that cities are “back in style,” Kotkin warns that whatever their form, cities can thrive only if they remain sacred, safe, and busy–and this is true for both the increasingly urbanized developing world and the often self-possessed “global cities” of the West and East Asia.

Looking at cities in the twenty-first century, Kotkin discusses the effects of developments such as shifting demographics and emerging technologies. He also considers the effects of terrorism–how the religious and cultural struggles of the present pose the greatest challenge to the urban future.

Truly global in scope, The City is a timely narrative that will place Kotkin in the company of Lewis Mumford, Jane Jacobs, and other preeminent urban scholars.

Joel Kotkin is an Irvine senior fellow with the New America Foundation, which is based in Washington, D.C. He is the author of five books, including Tribes and The New Geography, both published by Random House. Kotkin is a frequent contributor to The Washington Post, The Wall Street Journal, Inc. magazine, The American Enterprise, and the Los Aneles Times “Opinion” section. He also serves as a senior fellow of the Newman Institute at Baruch College of the City University of New York and lectures at the Southern California Institute of Architecture. He lives in Valley Village, Los Angeles, with his wife, Mandy, and two daughters, Ariel and Hannah.

Advance Praise for The City

“No one knows more about cities than Joel Kotkin, and has more to teach us about them. In The City, Kotkin takes us on a brisk and invigorating tour of cities from the Babylon of ancient times to the burgeoning exurbs of today. It is impossible not to learn a lot from this book.”
–Michael Barone, senior writer, U.S. News & World Report, and co-author of The Almanac of American Politics

“If you want to understand why the future of American and European cities is mixed at best, if you want to understand why George Bush won the 2004 election, you need to read Joel Kotkin’s account of how and why cities have developed and declined.”
–Fred Siegel, author of Prince of the City: Giuliani, New York and the Genius of American Life, senior fellow at the Progressive Policy Institute