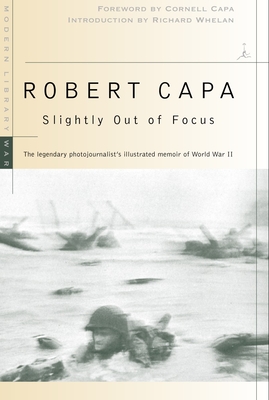 In 1942, a dashing young man who liked nothing so much as a heated game of poker, a good bottle of scotch, and the company of a pretty girl hopped a merchant ship to England. He was Robert Capa, the brilliant and daring photojournalist, and Collier's magazine had put him on assignment to photograph the war raging in Europe. In these pages, Capa recounts his terrifying journey through the darkest battles of World War II and shares his memories of the men and women of the Allied forces who befriended, amused, and captivated him along the way. His photographs are masterpieces -- John G. Morris, Magnum Photos' first executive editor, called Capa "the century's greatest battlefield photographer" -- and his writing is by turns riotously funny and deeply moving.

From Sicily to London, Normandy to Algiers, Capa experienced some of the most trying conditions imaginable, yet his compassion and wit shine on every page of this book. Charming and profound, Slightly Out of Focus is a marvelous memoir told in words and pictures by an extraordinary man.

Robert Capa was born in Budapest in 1913. At twenty-two he traveled to Spain to photograph the Spanish Civil War and soon established a reputation as one of the greatest war photojournalists in history. On May 25, 1954, in French Indochina, Capa was the first American photographer to die in what would become the Vietnam War.

Cornell Capa is Robert Capa's younger brother. A distinguished photojournalist, he founded the International Center of Photography in New York City in 1974.

"A powerful story nimbly told. For devotees of fine photography or accounts of World War II, the Modern Library 's reprinting is a welcome gift."
-- Tampa Tribune and Times

"Above all--and this is what shows in his pictures--Capa, who spent so much energy on inventions for his own person, has deep, human sympathy for men and women trapped in reality."
-- John Hersey