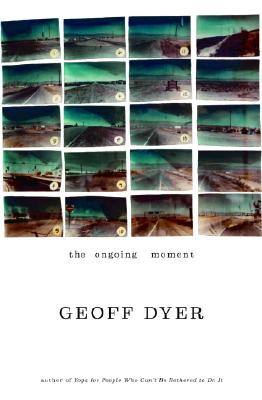 In his most recent book, Yoga for People Who Can’t Be Bothered to Do It, Geoff Dyer confessed that not only did he not take pictures in the course of his travels but that he does not even own a camera. With characteristic perver-sity—and trademark originality—Dyer has now come up with an idiosyncratic history of
. . . photography. Seeking to identify their signature styles, Dyer looks at the ways in which such canonical figures as Alfred Stieglitz, Paul Strand, Walker Evans, André Kertész, Edward Weston, Dorothea Lange, Diane Arbus, and William Eggleston, among others, have photographed the same things (barber shops, benches, hands, roads, and signs, for example). In doing so, he constructs a narrative in which these photographers—many of whom never met—constantly encounter one another.

Great photographs change the way we see the world; The Ongoing Moment changes the way we look at both. It is the most ambitious example to date of a form of writing that Dyer has made his own: the nonfiction work of art.

“An ingenious journey through the history of photography.” —Art Review

“Dyer has the naturally generous impulse of a great storyteller.” —The Boston Globe

“A masterful meditation. . . in which great, often melancholy themes are raised with lightness and very dry humor.” —Alain de Botton, Books of the Year, The Observer (London)

“Surprising. . . . [Dyer] pulls off a string of shrewd, often original ideas about a group of artists whose work had until now seemed thoroughly digested.” —The New York Times Book Review