The Oresteia of Aeschylus: A New Translation by Ted Hughes (Paperback) 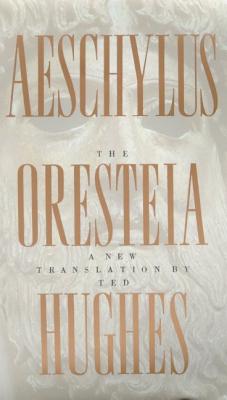 In the last year of his life, Ted Hughes completed translations of three major dramatic works: Racine's Phedre, Euripedes' Alcestis, and the trilogy of plays known as at The Oresteia, a family story of astonishing power and the background or inspiration for much subsequent drama, fiction, and poetry.

The Oresteia--Agamemnon, Choephori, and the Eumenides--tell the story of the house of Atreus: After King Agamemnon is murdered by his wife, Clytemnestra, their son, Orestes, is commanded by Apollo to avenge the crime by killing his mother, and he returns from exile to do so, bringing on himself the wrath of the Furies and the judgment of the court of Athens.

Hughes's "acting version" of the trilogy is faithful to its nature as a dramatic work, and his translation is itself a great performance; while artfully inflected with the contemporary, it has a classical beauty and authority. Hughes's Oresteia is quickly becoming the standard edition for English-language readers and for the stage, too.

TED HUGHES (1930-1998) published numerous volumes of poetry and prose for adults and children. He received the Guardian Award for Children's Fiction in 1985 and was appointed Poet Laureate of England in 1984.

“Aeschylus, the fifth-century BC Attic tragedian, is famous for his knottiness, his clotted images and riddling compund words. Ted Hughes,, in his postunously published translation of the Orestes trilogy, unites the knots and unpacks the compunded thoughts.” —Gary Wills, The New York Times Book Review

“Hughes's translation conveys a sense of the menacing stength of Aeschylus' poetry....Anyone who hears it or reads it will realize that there is much more to Greek drama than verbiage and literary virtuosity” —Mary Lefkowitz, Washington Times

“Hughes's rendering of this appalling story has the hurtling momentum one assumes the playwright's original Greek had for his Athenian audience....To release the play's staggering power Hughes has transformed some thoughtful scholarly commentary into raw horror and agonizing ethical dilemma....Ferociously physical...like the best of Hughes's own poems” —Ron Smith, Richmond Times-Dispatch