The Antelope's Strategy: Living in Rwanda After the Genocide (Hardcover) 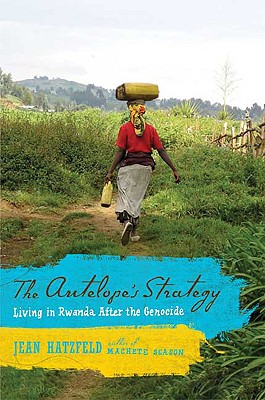 In two acclaimed previous works, the noted French journalist Jean Hatzfeld offered a profound, harrowing witness to the unimaginable pain and horror in the mass killings of one group of people by another.  Combining his own analysis of the events with interviews from both the Hutu killers who carried out acts of unimaginable depravity and the Tutsi survivors who somehow managed to escape, in one, based mostly on interviews with Tutsi survivors, he explored in unprecedented depth the witnesses’ understanding of the psychology of evil and their courage in survival; in the second, he probed further, in talks with a group of Hutu killers about their acts of unimaginable depravity.

Now, in The Antelope’s Strategy, he returns to Rwanda seven years later to talk with both the Hutus and Tutsis he’d come to know—some of the killers who had been released from prison or returned from Congolese exile, and the Tutsi escapees who must now tolerate them as neighbors. How are they managing with the process of reconciliation? Do you think in their hearts it is possible? The enormously varied and always surprising answers he gets suggest that the political ramifications of the international community’s efforts to insist on resolution after these murderous episodes are incalculable. This is an astonishing exploration of the pain of memory, the nature of stoic hope, and the ineradicability of grief.

Jean Hatzfeld, an international reporter for Liberation since 1973, is the author of many books, including "Machete Season: The Killers in Rwanda Speak "(FSG, 2005). He lives in Paris.