Ideals and Ideologies: A Reader (Paperback) 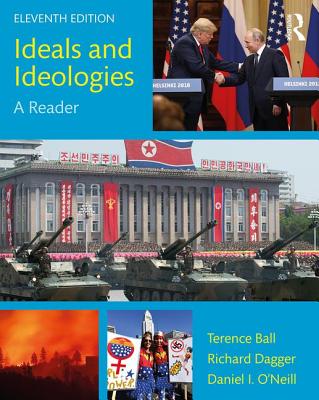 Ideals and Ideologies: A Reader is a comprehensive compilation of classic and contemporary readings representing all of the major "isms." It offers students a generous sampling of key thinkers in different ideological traditions and places them in their historical and political contexts. Used on its own or with Political Ideologies and the Democratic Ideal, the anthology accounts for the different ways people use ideology and conveys the continuing importance of ideas in politics.

New to this 11th Edition:

Alexander Keyssar, "Voter Suppression, Then and Now" (a distinguished historian traces the tawdry history of attempts, successful and unsuccessful, to disenfranchise voters). Andrew Sullivan, "Democracies End When They Become Too Democratic" (an eminent conservative commentator and author argues that, under certain circumstances, democracies pose a danger to their very own existence). Timothy Egan, "The Dumbed Down Democracy" (a prominent author and columnist argues that American democracy has been "dumbed down" due, in large part, to the absence of civic education in the public school curriculum). Max Boot and David Brooks, "Conservatives Assess Trump" (two leading contemporary conservatives ponder the fundamental ideological problems the current president poses for the movement, and consider the ways in which Donald Trump is--and isn't--a true conservative). Eugene V. Debs, "Speech to the Conference for Progressive Political Action" (an early 20th-century American socialist and former presidential candidate articulates his vision for a new workers' party that would challenge capitalism in the United States). Robert Kagan, "This is How Fascism Comes to America" (a prominent neoconservative historian detects disturbing parallels between the rise of Donald Trump and that of various interwar fascists). Erik Loomis, "A New Chapter in the Black Liberation Movement" (an American historian makes the case for Black Liberation with a particularly compelling case study: how prisoners (mainly black) work essentially as slaves in both public and for-profit prisons in the United States). Black Lives Matter, "A Vision for Black Lives: Demands for Black Power, Freedom & Justice" (leaders of the Black Lives Matter movement set forth their basic ideological beliefs and public policy prescriptions). Josephine Livingstone, "The Task Ahead for Feminism" (the author argues that much remains to be done after the #MeToo movement).