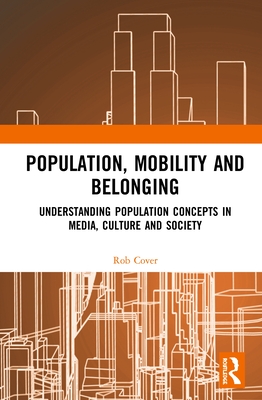 By Rob Cover
Email or call for price.

In a world of increasing mobility and migration, population size and composition come under persistent scrutiny across public policy, public debate, and ﬁlm and television. Drawing on media, cultural and social theory approaches, this book takes a fresh look at the concept of 'population' as a term that circulates outside the traditional disciplinary areas of demography, governance and statistics--a term that gives coherence to notions such as community, nation, the world and global humanity itself. It focuses on understanding how the concept of population governs ways of thinking about our own identities and forms of belonging at local, national and international levels; on the manner in which television genres ﬁxate on depictions of overpopulation and underpopulation; on the emergence of questions of ethics of belonging and migration in relation to cities; on attitudes towards otherness; and on the use by an emergent 'alt-right' politics of population in 'forgotten people' concepts. As such, it will appeal to scholars of sociology, geography and media and cultural studies with interests in questions of belonging, citizenship and population.

Rob Cover is Professor in the School of Media and Communication at RMIT University, Melbourne Australia. He is the author of Queer Youth Suicide, Culture and Identity: Unliveable Lives?, Vulnerability and Exposure: Footballer Scandals, Masculine Identity and Ethics, Emergent Identities: New Sexualities, Gender and Relationships in a Digital Era, Digital Identities: Creating and Communicating the Online Self and Flirting in the Era of #MeToo: Negotiating Intimacy. He is co-editor of the anthology Youth, Sexuality and Sexual Citizenship.