A Measure of Light: A Novel (Paperback) 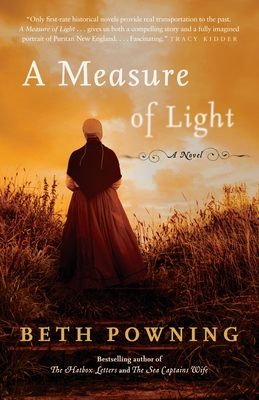 With Beth Powning’s trademark elegance and insight into the hearts and minds of unforgettable women, A Measure of Light brings to life an extraordinary historical figure.

Mary Dyer is a seventeenth-century Puritan who flees persecution in England, only to find the colony of Massachusetts Bay as dangerous as the country she left behind. Though she is the wife of a successful merchant and mother to their children, she becomes stigmatized following a birth gone terribly wrong and is reviled as a friend to the infamous heretic Anne Hutchinson. Mary tries to accept New England’s harsh realities, but is out­raged by the cold-hearted Puritan magistrates, with their doctrinaire stranglehold on church and state, their sub­jugation of women, their wars against the natives in the surrounding territories and their vicious treatment of any who challenge their rule.

Mary becomes one of America’s first Quakers. As both outcast and privileged citizen, caught between the call­ings of faith and the ambitions of her husband, she comes to the realization that she must follow her convictions in order to bring an end to the brutal repression of the Quakers in Massachusetts, for whom death by hanging is the ultimate punishment.

From Mary’s relationship with Anne Hutchinson to her fiery exchanges with the colonial magistrates, A Measure of Light is both a sensitive work of imagi­nation and meticulously true to the historical record. In this exceptional pairing of author and subject, Mary Dyer receives in the hands of Beth Powning— herself a New England–born Quaker—the full-blooded recognition too long denied a woman of her moral stature and significance in shaping American history.

BETH POWNING's previous books include the bestselling novels The Hatbox Letters, The Sea Captain's Wife, and most recently A Measure of Light, a Globe and Mail Best Book and winner of the inaugural New Brunswick Book Award for Fiction. Her works of memoir include Seeds of Another Summer: Finding the Spirit of Home in Nature, Shadow Child: An Apprenticeship in Love and Loss, and Edge Seasons: A Mid-Life Year. In 2010, Beth was awarded New Brunswick's Lieutenant-Governor's Award for High Achievement in English-Language Literary Arts. She lives on a 300-acre farm near Sussex, New Brunswick, with her husband, the renowned sculptor Peter Powning.

“[A] compelling, gorgeously written novel. . . . Fans of Powning know she is excellent at describing nature as part of the rhythm of daily life.” —Elissa Barnard, The Chronicle Herald

“Beth Powning is one of Canada’s literary gems and A Measure of Light is a truly stunning novel, brilliantly evoking seventeenth century England and America. A sweeping novel that moves back and forth across the Atlantic, it also uncovers the rigidity of those who thought they had brought religious freedom to the New World only to be caught up by their own beliefs. This is indeed a novel that deserves a place on your bookshelf. And if you haven’t read them, buy or borrow Powning’s other novels. They are equally enchanting.” —Andrew Armitage, The Sun Times (Owen Sound)

“It’s a page-turner with a growing sense of foreboding as Powning depicts how ambition and power corrupt human beings. . . . It’s chilling to read about the pain and sacrifice endured by Mary and other free-thinking women in such a deeply misogynistic culture. . . . [Powning] describes Mary’s life with beautiful subtlety, never using a broadaxe to draw comparisons with the mores of modern times. Instead she uses subtlety and grim humour.” —Linda Diebel, Toronto Star

“Beth Powning is known for her lyrical, powerful writing and the profound emotional honesty of her work. . . . This gripping historical fiction captures the spirit of a truly courageous woman struggling for women’s rights, liberty of conscience, intellectual freedom and justice.” —UNB Newsroom

“In Beth Powning’s latest novel, faith collides with religious intolerance, and luscious writing acts as a counterpoint to an often stark story. . . . Remarkable book. A Measure of Light is a true story that Powning has transformed into a work of art. . . . Powning created
Mary’s early years, added characters, fictionalized dialogue and cast the entire story in a frame of writing so rich in description that is almost verges on becoming voluptuous at times. . . . Powning offsets the austere existence of the Puritans and Quakers with warm, evocative writing. She has a gift for producing . . . wonderful images. . . . The world of Mary Dyer is palpable and real, as are the characters who inhabit the book. . . . Powning, who lives near Sussex, N.B., shows again that she is in the top tier of Canadian novelists. If there is a comparison to be drawn, then it is with one of the best historical novelists, Penelope Fitzgerald. With Fitzgerald, Powning shares the ability to create gorgeous, tactile scenes that are at once original and alive with life. A Measure of Light transcends genre writing; rather, it is a keenly intelligent, memorable work of literature, and that rare thing, a book worth returning to again.” —Charles Mandel, Telegraph-Journal

“A Measure of Light is a dark, shatteringly exquisite book. . . . Prose-wise, there isn’t a page in A Measure of Light where something extraordinary doesn’t happen. Like a method actor, Powning has infiltrated Mary’s world so completely that she seems to write from squarely within its walls. . . . It’s been suggested that Canadians embrace historical fiction because we’re insecure about our putatively drab, uneventful history. That one of the finest books in the genre to come along in ages should be about the birth of the country that’s the wellspring of so much of that insecurity is, then, both ironic and entirely fitting.” —Emily Donaldson, The Globe and Mail

“Powning writes about grief with uncanny precision; she gets all its ambushes and piercing aches exactly right.” —Lisa Moore, National Post

“Beth Powning has a talent for mining the past for its best stories. . . . A Measure of Light, like the best of historical fiction, explores lives from the past that provides insight into our lives today. . . . Powning uses both imagined letters and actual trial transcripts in tracing her life; the language is often arcane but never dull.” —Chuck Erion, The Record (Waterloo)

“Based on the true story of one of America’s first Quakers, this dramatic work of historical fiction shows New Brunswick author Beth Powning at her lyrical best.” —The United Church Observer

“A Measure of Light is a spellbinding work of biographical fiction, gorgeously written in spare, crystalline prose I found reminiscent of the finest writers of literary historical fiction today (Geraldine Brooks, Tracy Chevalier and Hilary Mantel come to mind). A brilliant evocation of seventeenth-century England and America, it’s the story of one woman’s search for faith and the horrific sacrifices she makes once she finds it. Grim yet luminous—as well as illuminating. In a word: enchanting.” —Sandra Gulland, author of the internationally bestselling Josephine B. Trilogy

“In this exquisitely written, sweeping novel, Beth Powning gives a tantalizing exploration into the life of Mary Dyer. A complex and rebellious woman unwaveringly faithful to her own beliefs, Dyer struggles with guilt, estrangement, and the troubling ways of love as she fights for religious freedom. Powning is a confident, elegant writer. Her insightful, often tender prose creates layers of imagery that are both brave and poignant. No reader will remain unmoved by her rendition of Mary Dyer’s compelling story.” —Linda Holeman, bestselling author of The Lost Souls of Angelkov and The Devil on Her Tongue