Garfield Dishes It Out: His 27th Book (Paperback) 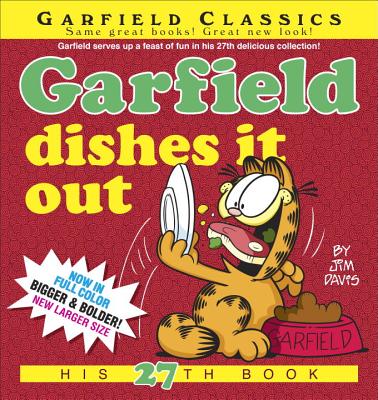 This is book number 27 in the Garfield series.

A five-course meal of laughs!

The surest way to a cat’s heart is through his stomach. Garfield knows this tasty fact from experience! After all, the only thing bigger than Garfield’s heart (and his latest hearty slab of lasagna) is his darling “little” tummy. But when he’s not eating between meals, America’s favorite feline is dishing out ample helpings of humor. So whether he’s triple-lutzing his way to supper or tap dancing with Odie by the light of the moon, Garfield was born to make us laugh well past dessert!

The GARFIELD CLASSICS series collects the early years of the GARFIELD comic strip in a larger, full-color format. Garfield may have gone through a few changes, but one thing has stayed the same: his enormous appetite for food and fun. So laugh along with the classic cat, because classics are always in style.

Jim Davis was born on July 28, 1945, in Marion, Indiana. He later attended Ball State University in Muncie, Indiana, where he distinguished himself by earning one of the lowest cumulative grade point averages in the history of the university. The Garfield strip was born on June 19, 1978, syndicated in forty-one U.S. newspapers. Today it’s syndicated in more than 2,100 newspapers worldwide with more than 200 million readers, leading Guinness World Records to name Garfield The Most Widely Syndicated Comic Strip in the World. Davis has had many successes with Garfield, including four Emmy Awards for Outstanding Animated Program and induction into the Licensing Hall of Fame (1998), but his most prized awards are from his peers in the National Cartoonist Society: Best Humor Strip (1981 and 1985), the Elzie Segar Award (1990), and the coveted Reuben Award (1990) for overall excellence in cartooning.