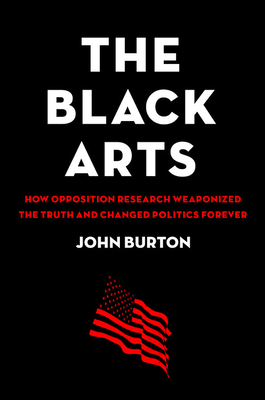 The first book to tell the story of political opposition research-- how it is done and why it matters-- by a former member of President Obama's staff whose meteoric rise as a campaign operative offers a brilliant dissection of how politics is played today
In the vein of Michael Lewis' LIAR'S POKER and THIS TOWN by Mark Leibovich, BLACK ARTS is the first-person narrative of a well-placed insider revealing the workings of a part of our society that is as influential and powerful as it is unfamiliar. You'll meet irreverent trash-talking campaign hacks and ordinary citizens volunteering in the "Resistance," ride the ups and downs of an underdog Presidential campaign and navigate through the fog generated by Trump's political machine. John Burton shares the nitty-gritty details of how he finds and disseminates information and along the way, tell stories --- some sobering, some hilarious --- that have never been publicly told.
In our current moment of rising populism and distrust of institutions like "the media" and "the political establishment," the lack of knowledge about how these institutions work becomes the vacuum within which distrust and conspiracy theories flourish. By offering a crystal-clear account of exactly how political campaigns and journalists interact, Burton interrogates the "fake news" debate, showing that a certain strain of populism grows stronger when we don't understand how politics works. THE BLACK ARTS will empower the American people to participate in politics . Unafraid to "go low"---THE BLACK ARTS describes in unforgettable detail what it takes to win an election.

John Burton also has a powerful personal story. Growing up a black gay kid in working class Miami, he traced a path from the margins of our society through some of America's most elite institutions of education, influence and power. Perhaps the unlikeliest of political operatives, John Burton is an outsider's insider.

John Burton, born in Miami, got his start conducting opposition research on Hilary Clinton and John McCain as part of Obama's 2008 presidential campaign. He later took a position with the administration serving in the Treasury Department before leaving Washington to pursue a business degree at Stanford. After Trump's election, Burton was co-founder and political director of Daily Action and later started his own activist organization, Citizen Strong, which uses thousands of volunteers to conduct opposition research in support of Democrats running in tight races across the country, successfully ousting heavy weight Republican candidates, like Dana Rohrabacher, from office.