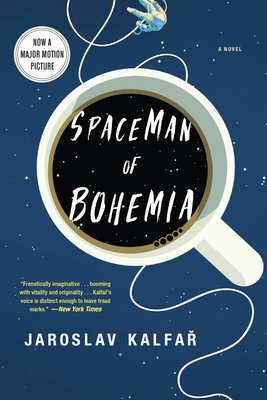 An intergalactic odyssey of love, ambition, and self-discovery.

Orphaned as a boy, raised in the Czech countryside by his doting grandparents, Jakub Prochv°zka has risen from small-time scientist to become the country's first astronaut. When a dangerous solo mission to Venus offers him both the chance at heroism he's dreamt of, and a way to atone for his father's sins as a Communist informer, he ventures boldly into the vast unknown. But in so doing, he leaves behind his devoted wife, Lenka, whose love, he realizes too late, he has sacrificed on the altar of his ambitions.

Alone in Deep Space, Jakub discovers a possibly imaginary giant alien spider, who becomes his unlikely companion. Over philosophical conversations about the nature of love, life and death, and the deliciousness of bacon, the pair form an intense and emotional bond. Will it be enough to see Jakub through a clash with secret Russian rivals and return him safely to Earth for a second chance with Lenka?

Rich with warmth and suspense and surprise, Spaceman of Bohemia is an exuberant delight from start to finish. Very seldom has a novel this profound taken readers on a journey of such boundless entertainment and sheer fun.

Jaroslav Kalfar was born and raised in Prague, Czech Republic, and immigrated to the United States at the age of fifteen. He earned an MFA at New York University, where he was a Goldwater Fellow and a nominee for the inaugural E. L. Doctorow Fellowship. He lives in Brooklyn. Spaceman of Bohemia is his first novel.

PRAISE FOR SPACEMAN OF BOHEMIA:

"Kalfar has much larger aims with Spaceman of Bohemia than to write a spry, madcap work of speculative fiction . . . He has such a lively mind and so many ideas to explore . . . Kalfar has an exhilarating flair for imagery. He writes boisterously and mordantly . . . His voice is distinct enough to leave tread marks . . . A frenetically imaginative first effort, booming with vitality and originality."
—Jennifer Senior, New York Times

"Spaceman of Bohemia gets heavy-but the story, like its protagonist, flies along weightlessly. A book like this lives and dies on the strength of its first-person voice, and in that regard, Kalfar triumphs. Jakub may be self-absorbed, but he's also charming, funny, and endearingly sympathetic."—Jason Heller, NPR

"In Jaroslav Kalfar's zany first novel . . . the spaceman, the alien, and all the rest of the book's extravagant conceptual furniture are merely metaphors for the human-scale issues that are its real concerns, in particular the collapse of Jakub's marriage to Lenka. That's not to say Kalfar hasn't done his research. There are lovingly detailed passages on the minutiae of life in zero gravity, but all the whizzy space business is harnessed to the basic question of what it means to leave and whether it's possible to come back. The alien acts as a Proustian trigger for Jakub's memories . . . But for all the strangeness of outer space, it is the writing about his home village, the place to which he longs to return and perhaps never can, that beats strongest in this wry, melancholy book."—Hari Kunzru, New York Times Book Review

The author skillfully splices a barbed picture of the Czech Republic between Jakub's misadventures in the cosmos. "These include floating free inside the dust cloud and hitching a ride on a clandestine Russian space shuttle. The book suggests that every national hero has a dark side, though you may have to leave Earth to see it."—Sam Sacks, Wall Street Journal "Best New Fiction"

"Outer space, inner turmoil, fierce ambition and the hunger for love - all seem to boldly go where no novelist has gone before in Jaroslav Kalfar's audaciously moving debut, Spaceman of Bohemia...Eloquent, heart-stunning and rich in awe-inspiring prose, Spaceman of Bohemia flirts with how we leave our mark on history. But its real mission is to unravel what makes us human - and that, according to this wise, rapturous and original novel, is a connection to others."—Caroline Leavitt, San Francisco Chronicle

"Spaceman of Bohemia should win many fans. With its interplanetary shenanigans and lessons in Czech history, this zany satirical debut is bursting at the seams."—Tibor Fischer, Guardian UK

"Blend Bradbury and Lem with Saint-Exupéry and perhaps a little Kafka, and you get this talky, pleasing first novel by Czech immigrant writer Kalfar....a book built on sly, decidedly contrarian humor. Blending subtle asides on Czech history, the Cold War, and today's wobbly democracy, Kalfar's confection is an inventive, well-paced exercise in speculative fiction. An entertaining, provocative addition to the spate of literary near-future novels that have lately hit the shelves."
—Kirkus Reviews

"Spaceman of Bohemia is an out-of-this-world look at all our beautiful smallnesses, from the cells of our biology to the bacterial minutiae of one broken heart. The roar of revolution and governmental injustice is cast against the depths of our emotions and the bottomless, grateful silence of the stars. Jaroslav Kalfar has spun an unforgettable tale, a poignant interplanetary work that collapses the distance between us with the beauty of its language and the unstoppable wonder of this universe he's created."
—Samantha Hunt, author of Mr. Splitfoot

"Spaceman of Bohemia is the best, most enjoyably heartbreaking, most fun book you'll read this year. On the surface, you'll see affinities with Gary Shteyngart, with The Martian, with Kelly Link. But Jaroslav Kalfar's voice is entirely his own. I beg you: take this strange, hilarious, profound, life-affirming trip into literary outer space."—Darin Strauss, National Book Critics Circle Award winner for Half a Life

"Spaceman of Bohemia is a wise and elegant work composed of its own unique ethereal grace-a hauntingly beautiful story of solitude, hope, family, and love that transcends, uplifts, carries the reader away."—Dinaw Mengestu, author of The Beautiful Things That Heaven Bears

"Spaceman of Bohemia is unforgettable: a work of breathtaking scope and heart, and a reflection of humanity that's raw and strange and profound and true."—Lisa McInerney, author of The Glorious Heresies, winner of the Baileys Women's Prize for Fiction

"An exhilarating concoction of history, social commentary, and irony. Reading like Arthur C. Clarke's 2001 crossed with a Milan Kundera novel, set in a Philip K. Dick universe, with a nod to Franz Kafka's Metamorphosis, it manages to be singularly compelling while still providing mass appeal. Highly recommended."—Library Journal (starred review)

"Kalfar's writing has the same hyperactivity, and fidgety contempt for generic boundaries, as that of the young Safran Foer.... Part space opera, part folk tale, his novel is also a love song to the city of Prague.... Funny, humane and oddly down-to-earth in ways that its scenario cannot possibly convey."
—Claire Armitstead, Guardian UK