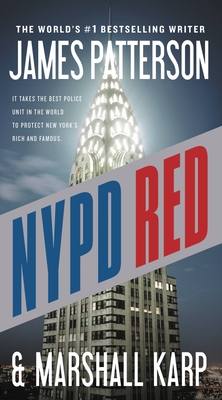 This is book number 1 in the NYPD Red series.

On the opening night of New York's biggest Hollywood event, special task force NYPD Red is on high alert -- and they can't afford to make a single mistake.
NYPD Red is a special task force charged with protecting the interests of Manhattan's wealthiest and most powerful citizens. When a world-famous movie producer is poisoned on the first day of a Manhattan film festival called Hollywood on the Hudson, they are the first ones called. Then an actor is killed on the set of a film. And a Molotov cocktail explodes at a movie premiere.
Detective First Grade Zach Jordan and his new partner-and ex-girlfriend-Detective Kylie MacDonald are assigned to the case. The killer has every murder, every escape, planned down to the last detail-and he's scripted an explosive finale that will bring New York and Hollywood to its knees. With larger-than-life action, relentless speed, and white-knuckle twists, NYPD Red is a mega-blockbuster from "The Man Who Can't Miss." (Time).