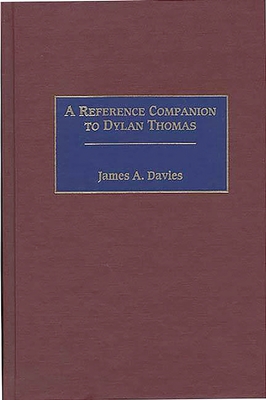 By James A. Davies
Email or call for price.

Almost a half century after his death in 1953, the Welsh author Dylan Thomas continues to capture the attention of scholars and critics. Though he attained some measure of fame before he died, he never enjoyed financial prosperity. His life was plagued with difficulties of all kinds, and he was only 39 years old at the time of his death. Some of his works, such as Fern Hill and Do not go gentle into that good night are frequently included in anthologies, and Thomas is now often considered one of the most important and original poets of the 20th century. During his trips to the United States, he read his works to large audiences on college campuses. He also made a number of radio broadcasts and recordings, and his moving voice made scores of listeners respond emotionally to his poems.

Though Dylan Thomas has earned his place in literary history, readers often find his poems difficult to understand. This reference book is a valuable guide to his life and work. Because his writings are so very much a product of his troubled life, the volume begins with an insightful biography that provides a context for understanding Thomas's works. The second section then systematically overviews his works. While his poems receive much attention, the section also includes discussions of his prose works, his filmscripts, and his broadcasts. A third section then surveys the critical and scholarly response to his writings, with separate chapters detailing his reception in Wales, England, and North America. A selected bibliography lists editions of Thomas's works, along with the most important general studies of his writings.

JAMES A. DAVIES is Senior Lecturer in English at the University of Wales, Swansea./e He has been visiting professor at Baylor University and Andrew W. Mellon Fellow at the Harry Ransom Humanities Research Center at the University of Texas at Austin. He is secretary of the Region and Nation Literature Association, and treasurer of the Association for Welsh Writing in English. In addition to many articles and reviews he has published John Forster: A Literary Life (1983), Dylan Thomas's Places (1987), The Textual Life of Dicken's Characters (1989), and Leslie Norris (1991).