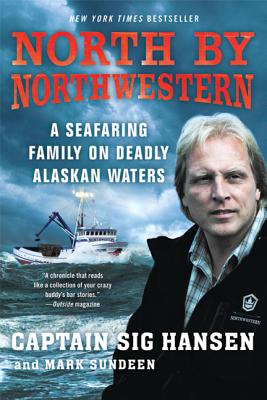 "A chronicle that reads like a collection of your crazy buddy's bar stories about his crazier old man." –Outside Magazine

In the tradition of Sebastian Junger and Linda Greenlaw comes Captain Sig Hansen's rags-to-riches epic of his immigrant family's struggle against deadly Alaskan seas, freezing shipwrecks, and dangerously brutal conditions to achieve the American Dream. For Captain Sig Hansen and his brothers, Norman and Edgar, commercial fishing is as much a part of their Norwegian heritage as their names. Descendants of the Vikings who ruled the northern seas for centuries, Sig and his brothers learned to fish from their father when they were boys, just as their father had learned from his father. And after twenty years as a skipper on the commercial fishing vessel the Northwestern Sig has lived to tell the tales.

This is the story of a family of survivors; part memoir and part adventure tale, North by Northwestern brings readers on deck, into the dockside bars and into the history of a family with a common destiny. Built around the gripping tale of a deadly shipwreck like The Perfect Storm, North By Northwestern tells the multigenerational history of the Hansen family, a clan of tough Norwegian-American fishermen who have become modern day folk-heroes.

Sig Hansen is the captain of the commercial fishing vessel Northwestern. With Mark Sundeen, he is the author of North by Northwestern: A Seafaring Family on Deadly Alaskan Waters. Hansen has been featured on Discovery Channel’s Deadliest Catch from the pilot through every season of the show.

Mark Sundeen is a contributor to Outside, New York Times Magazine, National Geographic Adventure, Men's Journal, and McSweeney's. He is the author of The Making of Toro and Car Camping.

“A chronicle that reads like a collection of your crazy buddy's bar stories about his crazier old man.” —Outside Magazine

“Captain Hansen's passionate love for his work, for the ocean, and for his fellow fishermen is undeniable and admirable.” —Examiner.com