Boiling Mad: Behind the Lines in Tea Party America (Paperback) 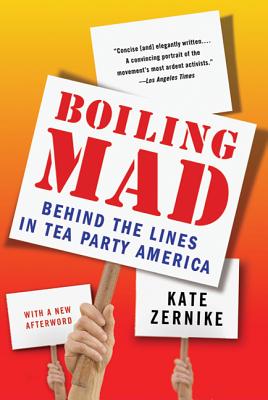 "Concise [and] elegantly written. . . . A convincing portrait of the movement's most ardent activists."—Los Angeles Times

They burst on the scene at the height of the Great Recession—thousands of angry voters railing against bailouts and big government—and within the year, the Tea Party had changed the terms of debate in Washington. This new populist movement set the agenda for the 2010 midterm elections, propelling a historic shift of power in Congress and capturing the mood of an anxious country. By election day, a remarkable four in ten voters called themselves Tea Party supporters.

Boiling Mad is Kate Zernike's eye-opening look inside the Tea Party, introducing us to its cast of unlikely activists and the philosophy and zeal that animate them. She shows how the movement emerged from an unusual alliance of young, Internet-savvy conservatives and older people who came to the movement out of fear and frustration. She takes us behind the scenes as well-connected groups in Washington move to mobilize the grassroots energy, and inside the campaign that best showed the movement's power and its contradictions. Putting the Tea Party in the context of other conservative revolts, Zernike shows us how the movement reflects important philosophical and cultural strains that have long been a feature of American politics.

Kate Zernike is a national correspondent for The New York Times and was a member of the team that shared the 2002 Pulitzer Prize for explanatory reporting. She is author of the book Boiling Mad: Inside Tea Party America. She is a graduate of the University of Toronto and Columbia University Graduate School of Journalism. She lives with her family outside New York City.

“Required reading for anyone who wants to understand the Tea Party movement.” —Gail Collins, The New York Times

“Illuminating… a picture of how different some Tea Partiers are from the Republican establishment's view of the movement.” —The New York Times Book Review

“[Zernike's] concise, elegantly written book is a refreshing reminder of what traditional journalism -- so often despised and discounted these days -- can contribute to the public conversation. . . . A convincing portrait of the [tea party] movement's most ardent activists.” —Los Angeles Times

“A brisk chronicle of the people who have streamed to the protests [and] flocked to the polls.” —The New Republic

“The most informative and readable.” —The Hill

“The beauty of Boiling Mad is that it's room-temperature calm. With fresh and surprising reporting, Kate Zernike cuts through the hype on both sides to show the Tea Party as it really is, not as partisans depict it. It's a complete, balanced, incisive and important account of a reactionary movement that's changing the country.” —Jonathan Alter, author of The Promise: President Obama, Year One