The Girl Who Played with Fire (Millennium Series #2) (Paperback) 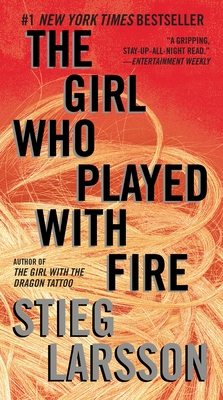 This is book number 2 in the Millennium Series series.

“Anyone who read The Girl With the Dragon Tattoo will not be disappointed in Stieg Larsson's latest. Lisbeth Salander, the brilliant -- and odd -- hacker, finds herself not only a murder suspect, but also a victim. With a plot that includes the sex trade in Sweden, this is a novel that will keep you up all night!”
— Carol Katsoulis, Anderson's Bookshop, Naperville, IL

Mikael Blomkvist, crusading publisher of the magazine Millennium, has decided to run a story that will expose an extensive sex trafficking operation. On the eve of its publication, the two reporters responsible for the article are murdered, and the fingerprints found on the murder weapon belong to his friend, the troubled genius hacker Lisbeth Salander. Blomkvist, convinced of Salander’s innocence, plunges into an investigation. Meanwhile, Salander herself is drawn into a murderous game of cat and mouse, which forces her to face her dark past.

Stieg Larsson, who lived in Sweden, was the editor in chief of the magazine Expo and a leading expert on antidemocratic, right-wing extremist and Nazi organizations. He died in 2004, shortly after delivering the manuscripts for The Girl with the Dragon Tattoo, The Girl Who Played with Fire, and The Girl Who Kicked the Hornet’s Nest.

“Boasts an intricate, puzzle-like story line . . . even as it accelerates toward its startling and violent conclusion.”—Michiko Kakutani, The New York Times

“Gripping stuff. . . . A nail-biting tale of murder and cover-ups.”—People

“You might as well give up on the idea of sleep till you’ve finished the book.”—Dallas Morning News

“Buzzes with ideas [and] fizzes with fury.”—Los Angeles Times

“Lisbeth Salander [is] one of the most startling, engaging heroines in recent memory.”—USA Today

“I couldn’t put down The Girl Who Played with Fire and eagerly await book three. . . . You must find out what happens next.”—Erica Marcus, Newsday

“Lisbeth Salander could be the female Jason Bourne . . . It’s an intelligent, fascinating story that draws readers in, and keeps them turning the page.” —Associated Press

“Fantastic . . . Like all the great stories of just avengers that populate literature, this trilogy is secretly comforting, making us think that maybe all is not lost in this imperfect and deceitful world of ours. . . . Welcome to the immortality of fiction, Lisbeth Salander!”—Mario Vargas Llosa, El País

“Will likely confirm Larsson’s position as the most successful crime novelist in the world.” —Slate