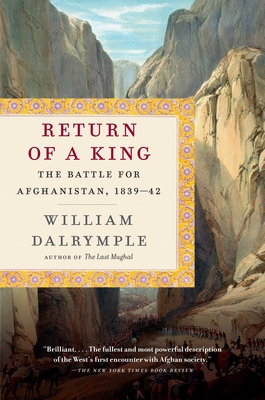 A Best Book of the Year: The Economist, Slate, Kirkus Reviews

In 1839, nearly 20,000 British troops poured through the mountain passes into Afghanistan and installed the exiled Shah Shuja on the throne as their puppet. But after little more than two years, the Afghans exploded into rebellion. The British were forced to retreat—and were then ambushed in the mountains by simply-equipped Afghan tribesmen. Just one British man made it through. But Dalrymple takes us beyond the story of this colonial humiliation and illuminates the key connections between then and now. Shah Shuja and President Hamid Karzai share the same tribal heritage; the Shah’s principal opponents were the Ghilzai tribe, who today make up the bulk of the Taliban’s foot soldiers. Dalrymple explains the byzantine complexity of Afghanistan’s age-old tribal rivalries, their stranglehold on politics, and how they ensnared both the British of the nineteenth century and NATO forces today. Rich with newly discovered primary sources, this stunning narrative is the definitive account of the first battle for Afghanistan.

William Dalrymple is the author of seven previous works of history and travel, including City of Djinns, which won the Young British Writer of the Year Prize and the Thomas Cook Travel Book Award; From the Holy Mountain; White Mughals, which won Britain’s Wolfson History Prize; and The Last Mughal, which won the Duff Cooper Prize for History and Biography. He is a contributor to The New York Review of Books and The New Yorker. He divides his time between New Delhi and London.

Praise for William Dalrymple’s Return of a King

“Brilliant. . . . The fullest and most powerful description of the West’s first encounter with Afghan society.” —The New York Times Book Review

“Masterful. . . . Dalrymple makes an important contribution by including recently discovered Afghan accounts of the war.” —The Washington Post

“At once deeply researched and beautifully paced, Return of a King should win every prize for which it’s eligible.” —Bookforum

“A serious work of history that expands our understanding of the war of 1839-42 by drawing on sources found in Russia, India, Pakistan and Afghanistan, many never before translated into English.” —Newsday

“Arguably the most important work in Dalrymple's impressive oeuvre. . . . If context is important, reading Dalrymple is paramount.” —The Sunday Guardian (London)

“A masterful history. . . . And as the latest occupying force in Afghanistan negotiates its exit, this chronicle seems all too relevant now.” —The Economist

“In Return of a King, Dalrymple has done again what he did magnificently for two other telling episodes of British imperial history in White Mughals (2002) and The Last Mughal (2006). . . . Dalrymple has a narrative gift.” —The Huffington Post

“A thrilling, amusing and educational three-track tour de force, relevant to today and even the immediate future.” —Pittsburgh Post-Gazette

“Definitive. . . . Return of a King is not just a riveting account of one imperial disaster on the roof of the world; it teaches unforgettable lessons about the perils of neocolonial adventures everywhere.” —Literary Review

“A major contribution to the historiography of south-west Asia and of the British empire. . . . Return of a King will come to be seen as the definitive account of the first and most disastrous western attempt to invade Afghanistan.” —New Statesman

“Complex and remarkable. . . . As taut and richly embroidered as a great novel. . . . This book is a masterpiece of nuanced writing and research, and a thrilling account of a watershed Victorian conflict.” —The Sunday Telegraph (London)

“[Dalrymple] is a master storyteller, whose special gift lies in the use of indigenous sources, so often neglected by imperial chroniclers. . . . Almost every page of Dalrymple’s splendid narrative echoes with latter-day reverberations.” —The Sunday Times (London)

“Few writers could go wrong with a story populated with so many villains, rogues, poltroons, swashbucklers, spies, assassins and heroes. But none would make a better job of it than William Dalrymple in this thrilling, magnificently evocative Return of a King.” —Mail on Sunday (London)

“Marvelous. . . . Brilliant, exact language. . . . There is much in Dalrymple’s superb book that has contemporary resonance.” —Sunday Herald

“Shows all the elements we have come to expect from Dalrymple: the clear, fluid prose, the ability to give complex historical events shape, story and meaning, the use of new local sources to allow the voices of the people . . . to be heard alongside the much-better documented accounts of the invaders. . . . This is clear-eyed, non-judgmental, sober history, beautifully told.” —The Observer (London)

“Sensationally good. . . . Dalrymple writes the kind of history that few historians can match.” —The Scotsman

“An absorbing and beautifully written account of a doomed effort to control an apparently uncontrollably population. . . . A saga that makes for marvelous storytelling, filled with heroes, knaves, incompetent fools, and savage, bloodthirsty warriors. It has been told often before but perhaps never so well as by Dalrymple.” —Booklist (starred)