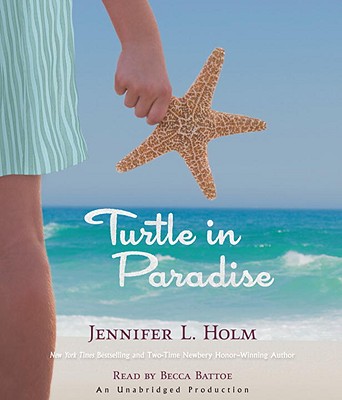 In Jennifer L. Holm's New York Times bestselling, Newbery Honor winning middle grade historical fiction novel, life isn't like the movies. But then again, 11-year-old Turtle is no Shirley Temple She's smart and tough and has seen enough of the world not to expect a Hollywood ending. After all, it's 1935 and jobs and money and sometimes even dreams are scarce. So when Turtle's mama gets a job housekeeping for a lady who doesn't like kids, Turtle says goodbye without a tear and heads off to Key West, Florida to live with relatives she's never met. Florida's like nothing Turtle's ever seen before though. It's hot and strange, full of rag tag boy cousins, family secrets, scams, and even buried pirate treasure Before she knows what's happened, Turtle finds herself coming out of the shell she's spent her life building, and as she does, her world opens up in the most unexpected ways. Filled with adventure, humor and heart, Turtle in Paradise is an instant classic both boys and girls with love. Includes an Author's Note with photographs and further background on the Great Depression, as well as additional resources and websites. Starred Review, Kirkus Reviews
"Sweet, funny and superb." Starred Review, Booklist
"Just the right mixture of knowingness and hope . . . a hilarious blend of family drama seasoned with a dollop of adventure.

JENNIFER L. HOLM is the New York Times bestselling author of three Newbery Honor Books, as well as the co-creator of the Babymouse and Squish series which she collaborates on with her brother Matthew Holm. From the Trade Paperback edition.

Starred Review, Booklist, April 15, 2010:
"Turtle is just the right mixture of knowingness and hope; the plot is a hilarious blend of family dramas seasoned with a dollop of adventure."

Review, School Library Journal, April 2010:
"This richly detailed novel was inspired by Holm’s great-grandmother’s stories. Readers who enjoy melodic, humorous tales of the past won’t want to miss it."