The End of the Long Summer: Why We Must Remake Our Civilization to Survive on a Volatile Earth (Hardcover) 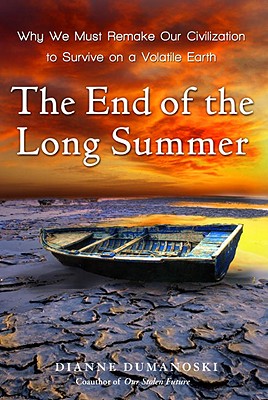 By Dianne Dumanoski
$25.00
Email or call for price.

For the past twelve thousand years, Earth’s stable climate has allowed human civilization to flourish. But this long benign summer is an anomaly in the Earth’s history and one that is rapidly coming to a close. The radical experiment of our modern industrial civilization is now disrupting our planet’s very metabolism; our future hinges in large part on how Earth responds. Climate change is already bearing down, hitting harder and faster than expected. The greatest danger is not extreme yet discrete weather events, such as Hurricane Katrina or the calamitous wildfires that now plague California, but profound and systemic disruptions on a global scale. Contrary to the pervasive belief that climate change will be a gradual escalator ride into balmier temperatures, the Earth’s climate system has a history of radical shifts–dramatic shocks that could lead to the collapse of social and economic systems.

The question is no longer simply how can we stop climate change, but how can we as a civilization survive it.

The guiding values of modern culture have become dangerously obsolete in this new era. Yet as renowned environmental journalist Dianne Dumanoski shows, little has been done to avert the crisis or to prepare human societies for a time of growing instability. In a work of astonishing scope, Dumanoski deftly weaves history, science, and culture to show how the fundamental doctrines of modern society have impeded our ability to respond to this crisis and have fostered an economic globalization that is only increasing our vulnerability at this critical time. She exposes the fallacy of banking on a last-minute technological fix as well as the perilous trap of believing that humans can succeed in the quest to control nature. Only by restructuring our global civilization based on the principles that have allowed Earth’s life and our ancestors to survive catastrophe——diversity, redundancy, a degree of self-sufficiency, social solidarity, and an aversion to excessive integration——can we restore the flexibility needed to weather the trials ahead.

In this powerful and prescient book, Dumanoski moves beyond now-ubiquitous environmental buzzwords about green industries and clean energy to provide a new cultural map through this dangerous passage. Though the message is grave, it is not without hope. Lucid, eloquent, and urgent, The End of the Long Summer deserves a place alongside transformative works such as Silent Spring and The Fate of the Earth.

DIANNE DUMANOSKI is an award-winning journalist who writes on environmental issues and is the coauthor of "Our Stolen Future." She lives in Massachusetts.

“Remarkable . . . lucid . . . unsensational. . . . With personable authority, she makes the case for familiar environmentalist prescriptions as well as–which will surprise many–much that is usually considered culturally conservative (indeed, this isn’t an ideologically progressive tract at all). She concisely and trenchantly questions globalization’s effects on agriculture and traditional emergency preparedness. She cautions against trusting technology to handle all emergent catastrophes but for faith in what humanity outstandingly proved in the hundreds of millennia of dire weather before the long summer; namely, its prodigious adaptiveness. The popular environmental book of the year? Could be, and of many more to come.”
—Booklist, starred review

“A passionate, precise account of climate change and a persuasive strategy for dealing with ‘Nature’s return to center stage as a critical player in human history.’… Insightful. . . . Convincing.”
—Kirkus

“A splendid book. We cannot now stop global change, but we can adapt and survive. Crucial to survival is the need to understand our planet, and Dianne Dumanoski’s powerful book is the best guide that I have seen. It is a delight to read and clearly written in the best tradition of great American journalism.”
—James Lovelock, author of The Revenge of Gaia

“Lyrically, luminously, Dumanoski has summoned up such a display of scientific and historical perspective that finally we are able . . . to confront the enormity of the cultural transformation we must now make. A work of great wisdom and insight and, I would add, courage, her book commands our attention.”
—James Gustave Speth, author of The Bridge at the Edge of the World

“There is perhaps no book that provides such a perceptive analysis of the cultural hurdles we are facing to create a sustainable future. There is also no book that combines this perspective with rigorous scientific information regarding the immense challenges of climate change. This book is a tour de force–providing hope in the midst of sobering news. Dianne Dumanoski has created a classic.”
—Mary Evelyn Tucker, cofounder of the Forum on Religion and Ecology

“Dianne Dumanoski makes it clear that we are facing a planetary emergency driven by climate change. She then asks the question that political leaders everywhere should be asking, namely, Can we harness the economy to a mission that goes beyond the accumulation of wealth? Thoughtful, insightful, and deeply informative.”
—Lester R. Brown, author of Plan B 3.0: Mobilizing to Save Civilization

“The End of the Long Summer provides a startlingly honest point of entry into a future that is as uncertain as it is threatening. Dumanoski makes clear that we need to change not just our technologies but our fundamental worldview if we are to survive as a coherent civilization.”
—Ross Gelbspan, author of The Heat Is On and Boiling Point

“Dianne Dumanoski transforms the daunting complexities of our planetary emergency into a lucid, fascinating, and compelling book. With impeccable thoroughness she converts a wealth of information into an easy-to-read thriller. I couldn’t put it down.”
—Theo Colborn, coauthor of Our Stolen Future