Subliminal: How Your Unconscious Mind Rules Your Behavior (Hardcover) 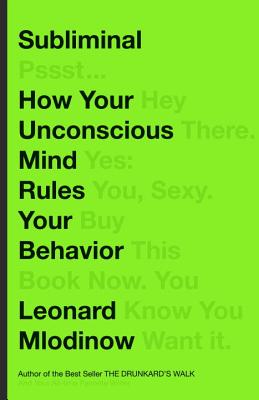 By Leonard Mlodinow
Email or call for price.
Special Order

Leonard Mlodinow, the best-selling author of The Drunkard’s Walk and coauthor of The Grand Design (with Stephen Hawking), gives us a startling and eye-opening examination of how the unconscious mind shapes our experience of the world and how, for instance, we often misperceive our relationships with family, friends, and business associates, misunderstand the reasons for our investment decisions, and misremember important events.

Your preference in politicians, the amount you tip your waiter—all judgments and perceptions reflect the workings of our mind on two levels: the conscious, of which we are aware, and the unconscious, which is hidden from us. The latter has long been the subject of speculation, but over the past two decades researchers have developed remarkable new tools for probing the hidden, or subliminal, workings of the mind. The result of this explosion of research is a new science of the unconscious and a sea change in our understanding of how the subliminal mind affects the way we live.

Employing his trademark wit and lucid, accessible explanations of the most obscure scientific subjects, Leonard Mlodinow takes us on a tour of this research, unraveling the complexities of the subliminal self and increasing our understanding of how the human mind works and how we interact with friends, strangers, spouses, and coworkers. In the process he changes our view of ourselves and the world around us.

Leonard Mlodinow received his PhD in theoretical physics from the University of California, Berkeley, was an Alexander von Humboldt Fellow at the Max Planck Institute, and now teaches at the California Institute of Technology. His previous books include three New York Times best sellers: War of the Worldviews (with Deepak Chopra), The Grand Design (with Stephen Hawking), and The Drunkard’s Walk: How Randomness Rules Our Lives (also a New York Times Notable Book), as well as Feynman’s Rainbow and Euclid’s Window. He also wrote for the television series MacGyver and Star Trek: The Next Generation.

“Clever, engaging. . . . A popular-science beach book, the sort of tome from which cocktail party anecdotes can be mined by the dozen. . . . Subliminal makes its main point well and concisely.”
—The Oregonian

“An assault against the idea that we control our decisions and our beliefs in the way that we think we do . . . A useful addition to the growing body of work arguing convincingly against the idea of the rational human brain.”
—The Daily Beast

“Mlodinow, a theoretical physicist who has been developing a nice sideline in popular science writing, shows how the idea of the unconscious has become respectable again . . . Fascinating.”
—The Economist

“This very enlightening book explores the two sides of our mental lives, with a focus on the subconscious or subliminal element. Drawing on clinical research conducted over a period of several decades and containing a number of rather startling revelations . . . the book appeals to readers with an interest in the workings of the human mind.”
—Booklist

“One of the ten books to watch out for in 2012 . . . Physicist, science writer and Hollywood screenwriter Leonard Mlodinow is out to explore how important the unconscious is in shaping the way we process the world.”
—NewScientist.com

“Mlodinow never fails to make science both accessible and entertaining.”
—Stephen Hawking, author of A Brief History of Time

“Think you know the whys and hows of your choices? Follow Mlodinow on a gorgeous journey that will make you think again.”
—David Eagleman, author of Incognito

“With the same deft touch he showed in The Drunkard’s Walk, Mlodinow probes the subtle, automatic, and often unnoticed influences on our behavior.”
—Daniel J. Simons, professor of psychology, University of Illinois, and coauthor of The Invisible Gorilla

“If you liked The Drunkard’s Walk, you’ll love Subliminal. This engaging and insightful book not only makes neuroscience understandable, it also makes it fascinating. You will look at yourself (and those around you) in a new way.”
—Joseph T. Hallinan, author of Why We Make Mistakes

“A must-read book that is both provocative and hugely entertaining. Mlodinow provides many eye-opening insights into the ways we act in business, finance, politics, and our personal lives.”
—Jerry A. Webman, chief economist, OppenheimerFunds, Inc., and author of MoneyShift

“A highly readable, funny, and thought-provoking travelogue by Mlodinow, a trusted traveler in this treacherous region, who leads us on a tour of the little-known country that is our unconscious mind.”
—Christof Koch, professor of cognitive and behavioral biology, California Institute of Technology