Rust in Peace: The Inside Story of the Megadeth Masterpiece (Hardcover) 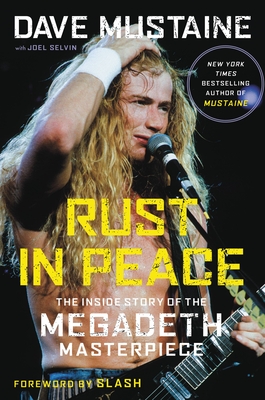 Get a behind-the-scenes look at the making of Megadeth’s iconic record, Rust in Peace, from the band’s lead vocalist and guitarist.

When Rust in Peace was released in 1990, the future of Megadeth was uncertain. Fresh off their performance at the record-breaking Monsters of Rock festival, and with knockout new albums from Slayer, Anthrax, and Metallica dominating the charts, the pressure to produce a standout statement record was higher than ever.

In Rust in Peace: The Inside Story of the Megadeth Masterpiece, the band's lead vocalist and guitarist, Dave Mustaine, gives readers a never-before-seen glimpse into the artistry and insanity that went into making the band's most iconic record. He recounts the arduous task of hiring the band and supporting cast, of managing egos and extracurriculars during the album's ensuing success, and succumbing to the pressures of fame and fortune—which eventually forced the band to break up.

And yet, Megadeth's demise was just the beginning; the birth pangs of the record were nothing compared to what came next. Alcohol, drugs, sex, money, power, property, prestige, the lies fed to the band by the industry—and the lies they told each other-threatened to eat away at the band's bond like rust, devouring it until only the music survived.

Featuring a foreword by Slash

Dave Mustaine is a singer, songwriter, and guitarist who has been performing for close to four decades. He is currently the lead vocalist and guitarist of the American heavy metal band Megadeth. His memoir, Mustaine, was a New York Times bestseller. He lives in Nashville.

Joel Selvin (coauthor) has covered pop music for the San Francisco Chronicle since 1970. He is the author of FareTheeWell, Altamont, and coauthor of Sammy Hagar's bestseller Red, among many more. He lives in San Francisco.

"You cannot discuss heavy metal without mentioning Dave Mustaine and Megadeth. I've known these guys since their beginning. We took them on their first national tour. This is one of the bands that sharpened the cutting edge of metal. This book tells the roller coaster story of their iconic album Rust in Peace and delves into their personal struggles to keep it all together while dealing with addiction. This struggle and eventual success is one of the things that make Dave Mustaine and Megadeth as a band so compelling. They went through it all and then some, and they came out the other end of it. It's one of the things we have in common. I am proud to have had a small hand in their sobriety during this period of their career. This book is a must read for metal fans. Herein lies their story-Glory, Destruction and Redemption."—Alice Cooper

"I have a tremendous amount of respect for Dave Mustaine.
Dave's always stayed true to himself and has never been interested in chasing
musical trends. If you ask me that's been the key to Megadeth's success and
longevity in this business."—Ozzy Osbourne

"Rust in Peace is an album that means so much to so many it's worthy of this book solely dedicated to it. And now I can't wait for the movie!"—Scott Ian of Anthrax

"The drug-fueled mayhem, the riots, the riffs.
The triumphs and the tragedies, no holds barred. I already considered myself a
knowledgeable Megadeth aficionado, but I could not put this book down! I
thoroughly enjoyed taking the trip with 'Deth on a journey that, against all
odds, leads us up to the rebirth of the band and one of the true masterpieces
of the Thrash Metal genre."—Michael Amott ofArch Enemy

"An amazing and frank look into the behind the scenes of the
making of one of the greatest albums in heavy metal history."—Brian Slagel, Chairman/CEO, Metal Blade Records

"Rust in Peace is probably the greatest Megadeth recording ever. Great line up, great songs and great sound. I admire Dave's style to this day. He really plays his ass off on this!!"—Kerry King of Slayer

"With a foreword by Guns n' Roses' guitarist Slash, and a who's-who of music industry participants, this rollicking history is a no-brainer for metal fans."—Publisher's Weekly

"An appropriately
spiky telling of the tale of a dangerously spiky record."—Kerrang!

"[This book] offers a vulnerable insight into the tension within the band and Mustaine’s struggles with addiction."—UDiscoverMusic

“An honest and unfiltered look at the most important era in the long, illustrious career of one of the greatest Metal bands of all time.”—Metal Talk