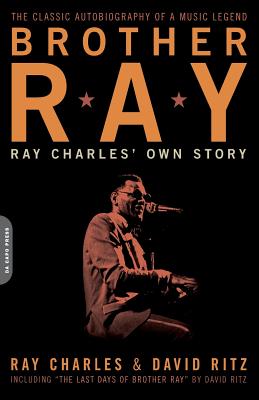 Ray Charles (1930-2004) led one of the most extraordinary lives of any popular musician. In Brother Ray, he tells his story in an inimitable and unsparing voice, from the chronicle of his musical development to his heroin addiction to his tangled romantic life. Overcoming poverty, blindness, the loss of his parents, and the pervasive racism of the era, Ray Charles was acclaimed worldwide as a genius by the age of thirty-two. By combining the influences of gospel, jazz, blues, and country music, he invented, almost single-handedly, what became known as soul. And throughout a career spanning more than a half century, Ray Charles remained in complete control of his life and his music, allowing nobody to tell him what he could and couldn't do.As the Chicago Sun-Times put it, Brother Ray is "candid, explicit, sometimes embarrassing, often hilarious, always warm, touching and deeply human-just like his music."

David Ritz is the author of Faith in Time: The Life of Jimmy Scott, Divided Soul: The Life of Marvin Gaye, and many other books with or about Ray Charles, Aretha Franklin, and B.B. King. He is a three-time winner of the Ralph J. Gleason Music Book Award. He lives in Los Angeles.