Voices of the Lost: A Novel (The Margellos World Republic of Letters) (Paperback) 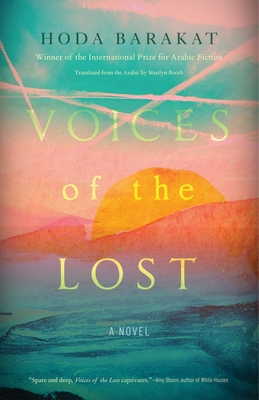 Winner of the International Prize for Arabic Fiction, this novel weaves together a series of devastating confessions about life in contemporary Arab society

“Spare and deep, Voices of the Lost captivates. Hoda Barakat is one of Lebanon's greatest gifts to literature, and Booth allows her English audience to explore this painful and irresistible present.”—Amy Bloom, author of White Houses

In an unnamed country torn apart by war, six strangers are compelled to share their darkest secrets. Taking pen to paper, each character attempts to put in writing what they can’t bring themselves to say to the person they love—mother, father, brother, lost love. Their words form a chain of dark confessions, none of which reaches the intended recipient.

Profound, troubling, and deeply human, Voices of the Lost tells the moving story of characters living on the periphery, battling with displacement, devastating poverty, and the demons within themselves. From one of today’s most talented Arabic writers, Voices of the Lost is an urgent story of lives intimately woven together in a society that is tearing itself apart.

Hoda Barakat has published five novels and two plays. In 2015, she was shortlisted for the Man Booker International Prize. Marilyn Booth is professor of Arabic languages and literature at Magdalen College, Oxford.

“The tragedies in Voices of the Lost are agonizing . . . [a] searing prizewinner.”—Madeleine Thien, The Guardian

“Voices of the Lost belongs with the most exemplary fiction of our contemporary diasporas, striving to match the new tragedy with a new form.”—John Domini, Brooklyn Rail

“Spare and deep, Voices of the Lost captivates. Hoda Barakat is one of Lebanon's greatest gifts to literature, and Booth allows her English audience to explore this painful and irresistible present.”—Amy Bloom, author of White Houses

“Marilyn Booth effortlessly captures the ache, incomprehension, and longing in Hoda Barakat’s spare and luminous prose. Barakat is without doubt one of the most important and gifted novelists writing today—as a translator, Booth is every bit her equal.”—Shawkat M. Toorawa, translator of Adonis: A Time Between Ashes and Roses

“Hoda Barakat is one of the most versatile and innovative novelists in the Arab world. Here, in a fugue of undelivered letters, she etches the portraits of a series of existential refugees, lost between countries, languages, and lives.”—Marilyn Hacker, author of Blazons

"A subversive novel that examines sorrow, longing, violence, kindness, and compassion. The places may be named, but the protagonists are nameless. We love them because they are us."—Fady Joudah, author of Tethered to Stars

“Voices of the Lost . . . stands out for its condensed economy of language, narrative structure, and capacity to convey the inner workings of human beings.”—Charafdine Majdouline, Chair of Judges, International Prize for Arabic Fiction