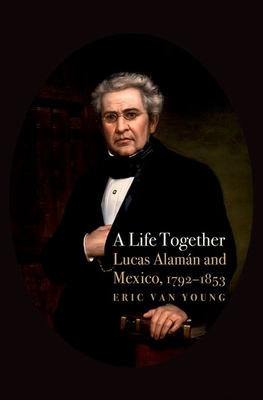 By Eric Van Young
Email or call for price.

An eminent historian’s biography of one of Mexico’s most prominent statesmen, thinkers, and writers

Lucas Alamán (1792–1853) was the most prominent statesman, political economist, and historian in nineteenth‑century Mexico. Alamán served as the central ministerial figure in the national government on three occasions, founded the Conservative Party in the wake of the Mexican‑American War, and authored the greatest historical work on Mexico’s struggle for independence. Though Mexican historiography has painted Alamán as a reactionary, Van Young’s balanced portrait draws upon fifteen years of research to argue that Alamán was a conservative modernizer, whose north star was always economic development and political stability as the means of drawing Mexico into the North Atlantic world of advanced nation‑states. Van Young illuminates Alamán’s contribution to the course of industrialization, advocacy for scientific development, and unerring faith in private property and institutions such as church and army as anchors for social stability, as well as his less commendable views, such as his disdain for popular democracy.

Eric Van Young is Distinguished Professor of History Emeritus at the University of California, San Diego. He is the author of several books, including The Other Rebellion, which was awarded the Bolton-Johnson Prize by the Conference on Latin American History.

“A massive and meticulous biography, which, perceptively recounting the multifaceted life of Lucas Alamán – politician, intellectual, businessman, historian, and founding father of Mexican conservatism – sheds striking fresh light on the turbulent times which he witnessed and helped shape.”—Alan Knight, University of Oxford
“An alluring and lyrical biography of one of Mexico’s towering statesmen and at the same time a lucid and absorbing history of early independent and republican Mexico. Van Young reconstructs, vividly, the world of Lucas Alamán and his compatriots, all the while probing the methodological challenges of writing a life. This is a masterpiece of historical research, writing, and interpretation.”—Raymond Craib, Cornell University
“Eric Van Young's magnum opus on Mexico's most consequential and controversial conservative politician, historian, political economist, and journalist--who frequently elicits comparisons with Alexander Hamilton and Prince Metternich--is much more than an engrossing biography. Based on fifteen years of archival research, and masterfully integrating Van Young's refined practice of cultural and psychological history with his deep engagement with economic history, it represents a daunting scholarly achievement.”—Gilbert M. Joseph, co-author of Mexico's Once and Future Revolution: Social Upheaval and the Challenge of Rule since the Late Nineteenth Century
“Eric van Young unveils Luca Alaman’s family life, businesses, accomplishments and frustrations. This biography surmounts the stereotypes of the man that lived Mexico´s independent history.”—Andrés Lira, El Colegio de Mexico