The Homeric Epics and the Gospel of Mark (Hardcover) 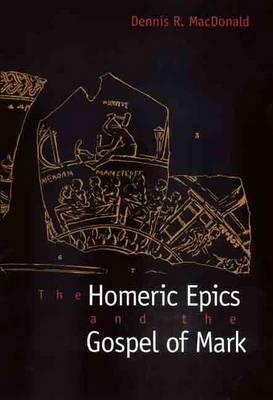 In this groundbreaking book, Dennis R. MacDonald offers an entirely new view of the New Testament gospel of Mark. The author of the earliest gospel was not writing history, nor was he merely recording tradition, MacDonald argues. Close reading and careful analysis show that Mark borrowed extensively from the Odyssey and the Iliad and that he wanted his readers to recognize the Homeric antecedents in Mark's story of Jesus. Mark was composing a prose anti-epic, MacDonald says, presenting Jesus as a suffering hero modeled after but far superior to traditional Greek heroes.

Much like Odysseus, Mark's Jesus sails the seas with uncomprehending companions, encounters preternatural opponents, and suffers many things before confronting rivals who have made his house a den of thieves. In his death and burial, Jesus emulates Hector, although unlike Hector Jesus leaves his tomb empty. Mark's minor characters, too, recall Homeric predecessors: Bartimaeus emulates Tiresias; Joseph of Arimathea, Priam; and the women at the tomb, Helen, Hecuba, and Andromache. And, entire episodes in Mark mirror Homeric episodes, including stilling the sea, walking on water, feeding the multitudes, the Triumphal Entry, and Gethsemane. The book concludes with a discussion of the profound significance of this new reading of Mark for understanding the gospels and early Christianity.