Killer on the Road: Violence and the American Interstate (Discovering America) (Paperback) 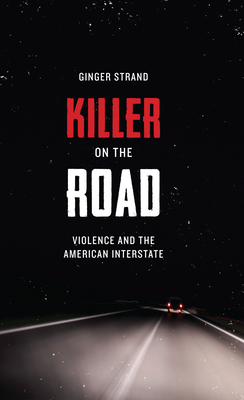 Starting in the 1950s, Americans eagerly built the planet’s largest public work: the 42,795-mile National System of Interstate and Defense Highways. Before the concrete was dry on the new roads, however, a specter began haunting them—the highway killer. He went by many names: the “Hitcher,” the “Freeway Killer,” the “Killer on the Road,” the “I-5 Strangler,” and the “Beltway Sniper.” Some of these criminals were imagined, but many were real. The nation’s murder rate shot up as its expressways were built. America became more violent and more mobile at the same time.

Killer on the Road tells the entwined stories of America’s highways and its highway killers. There’s the hot-rodding juvenile delinquent who led the National Guard on a multistate manhunt; the wannabe highway patrolman who murdered hitchhiking coeds; the record promoter who preyed on “ghetto kids” in a city reshaped by freeways; the nondescript married man who stalked the interstates seeking women with car trouble; and the trucker who delivered death with his cargo. Thudding away behind these grisly crime sprees is the story of the interstates—how they were sold, how they were built, how they reshaped the nation, and how we came to equate them with violence.

Through the stories of highway killers, we see how the “killer on the road,” like the train robber, the gangster, and the mobster, entered the cast of American outlaws, and how the freeway—conceived as a road to utopia—came to be feared as a highway to hell.

Ginger Strand is the author of Inventing Niagara, a Border’s Original Voices choice, and Flight, a novel. Her nonfiction has appeared in many places, including Harper’s, OnEarth, The Believer, and Orion, where she is a contributing editor. She grew up mostly in Michigan and now lives in New York City, but spends a lot of time on the road.

[P]art true-crime entertainment, part academic exegesis, part political folk ballad...Strand’s cross-threaded tales of drifters, stranded motorists, and madmen got its hooks into me. Reading Ms. Strand’s thoughtful book is like driving a Nash Rambler after midnight on a highway to hell.
— Dwight Garner

Draws startling parallels between the inexorable advance of the Interstate System and the proliferation of killers who were pathologically stimulated by that long, open road.
— Marilyn Stasio

[A] hybrid of cultural historian and indefatigable roving reporter, who can't help taking quirky pleasure sometimes in what ought to be an utterly grim story.
— Newsweek

Ginger Strand is in possession of a sharp eye, a biting wit, a beguiling sense of fun—and a magnificent obsession.
— Bloomberg

The grim stories of murder on the highway may do for road trips what Jaws did for surfing.
— Kirkus Reviews

Who knew that these marvelously engineered clover-leafed roadways would not just drive the economy but also create a deadly combination of social transience and personal anonymity, destabilizing sociopaths and psychopaths while making them feel invulnerable to legal consequences? . . . Killer on the Road merges the chilling appeal of true-crime stories with compelling social history.
— American History