Gente Decente: A Borderlands Response to the Rhetoric of Dominance (Paperback) 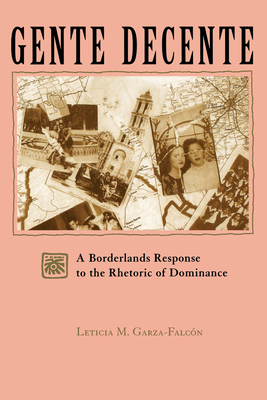 In his books The Great Plains, The Great Frontier, and The Texas Rangers, historian Walter Prescott Webb created an enduring image of fearless, white, Anglo male settlers and lawmen bringing civilization to an American Southwest plagued with "savage" Indians and Mexicans. So popular was Webb's vision that it influenced generations of historians and artists in all media and effectively silenced the counter-narratives that Mexican American writers and historians were concurrently producing to claim their standing as "gente decente," people of worth.

These counter-narratives form the subject of Leticia M. Garza-Falcón's study. She explores how prominent writers of Mexican descent-such as Jovita González, Américo Paredes, María Cristina Mena, Fermina Guerra, Beatriz de la Garza, and Helena María Viramontes -have used literature to respond to the dominative history of the United States, which offered retrospective justification for expansionist policies in the Southwest and South Texas. Garza-Falcón shows how these counter-narratives capture a body of knowledge and experience excluded from "official" histories, whose "facts" often emerged more from literary techniques than from objective analysis of historical data.