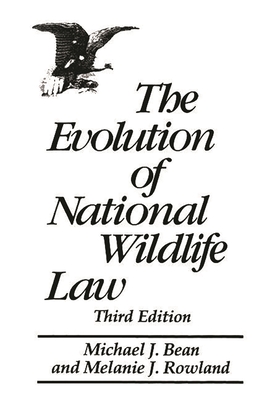 When the first edition of this book was published in 1977--to overwhelming critical and popular acclaim--it was the only publication to analyze wildlife law comprehensively as a distinct component of federal environmental law. The second edition, published in 1983, provided a thorough and authoritative update. Since then the intense public interest in wildlife law has been reflected in a tremendous growth in both litigation and new legislation. This, the third edition, thoroughly revises and updates the earlier edition in light of current legal perspectives on the conservation of wildlife and biological diversity.

Two decades after its first publication, this book remains the standard reference for anyone seeking to understand the statutes, regulations, and court decisions governing wildlife law. Like the two that preceded it, the new edition of The Evolution of National Wildlife Law monumental achievement that will serve lawmakers, administrators, educators, conservationists, and scholars for years to come. -- From the Foreword by Bruce Babbitt.

MICHAEL J. BEAN is Chair of the Environmental Defense Fund's Wildlife Program and is well-known for his expertise on endangered species conservation.MELANIE J. ROWLAND has been a faculty member at the University of Washington and Senior Counsel with The Wilderness Society. She is now an attorney with the National Oceanic and Atmospheric Administration's Office of General Counsel in Seattle.