Drawing on Religion: Reading and the Moral Imagination in Comics and Graphic Novels (Paperback) 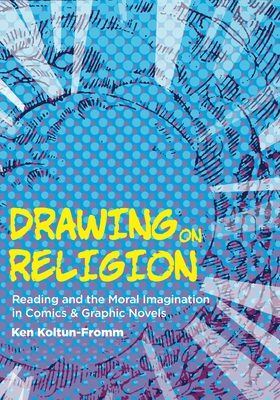 Comics traffic in stereotypes, which can translate into real danger, as was the case when, in 2015, two Muslim gunmen opened fire at the offices of Charlie Hebdo, which had published depictions of Islam and Muhammad perceived by many to be blasphemous. As a response to that tragedy, Ken Koltun-Fromm calls for us to expand our moral imaginations through readings of graphic religious narratives.

Utilizing a range of comic books and graphic novels, including R. Crumb's Book of Genesis Illustrated, Craig Thompson's Blankets, the Vakil brothers' 40 Sufi Comics, and Ms. Marvel, Koltun-Fromm argues that representing religion in these formats is an ethical issue. By focusing on the representation of Christian, Jewish, Muslim, and Hindu religious traditions, the comics discussed in this book bear witness to the ethical imagination, the possibilities of traversing religious landscapes, and the problematic status of racial, classed, and gendered characterizations of religious persons. Koltun-Fromm explores what religious stereotypes do and how they function in comics in ways that might expand or diminish our imaginative worlds. The pedagogical challenge, he argues, is to linger in that space and see those worlds well, with both ethical sensitivity and moral imagination.

Accessibly written and vibrantly illustrated, this book sheds new light on the ways in which comic arts depict religious faith and culture. It will appeal to students and scholars of religion, literature, and comic studies.

Ken Koltun-Fromm is Robert and Constance MacCrate Professor of Social Responsibility and Professor of Religion at Haverford College. He is the author of Imagining Jewish Authenticity: Vision and Text in American Jewish Thought and coeditor of Comics and Sacred Texts: Reimagining Religion and Graphic Narratives.