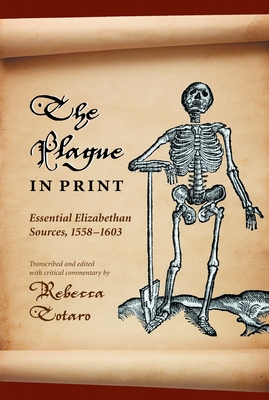 By Rebecca Totaro
Email or call for price.

In The Plague in Print, Rebecca Totaro takes the reader into the world of plague-riddled Elizabethan England, documenting the development of distinct subgenres related to the plague and providing unprecedented access to important original sources of early modern plague writing. Totaro elucidates the interdisciplinary nature of plague writing, which raises religious, medical, civic, social, and individual concerns in early modern England. Each of the primary texts in the collection offers a glimpse into a particular subgenre of plague writing, beginning with Thomas Moulton's plague remedy and prayers published by the Church of England and devoted to the issue of the plague. William Bullein's A Dialogue, both pleasant and pietyful, a work that both addresses concerns related to the plague and offers humorous literary entertainment, exemplifies the multilayered nature of plague literature. The plague orders of Queen Elizabeth I highlight the community-wide attempts to combat the plague and deal with its manifold dilemmas. And after a plague bill from the Corporation of London, the collection ends with Thomas Dekker's The Wonderful Year, which illustrates plague literature as it was fully formed, combining attitudes toward the plague from both the Elizabethan and Stuart periods.

These writings offer a vivid picture of important themes particular to plague literature in England, providing valuable insight into the beliefs and fears of those who suffered through bubonic plague while illuminating the cultural significance of references to the plague in the more familiar early modern literature by Spenser, Donne, Milton, Shakespeare, and others. As a result, The Plague in Print will be of interest to students and scholars in a number of fields, including sixteenth- and seventeenth-century English literature, cultural studies, medical humanities, and the history of medicine.

Rebecca Totaro is Professor of English at Florida Gulf Coast University. She is the author of Suffering in Paradise and coeditor of Representing the Plague in Early Modern England. A member of the Folger Institute Year-Long Colloquium "Vernacular Health and Healing" (2007-08), she was awarded a short-term fellowship at the Folger Shakespeare Library for her work on early modern meteorology and physiology, and recently received the 2010 Monroe Kirk Spears Award for the best essay of the year published in SEL Studies in English Literary Studies 1500-1900 for her essay, "Securing Sleep in Hamlet."