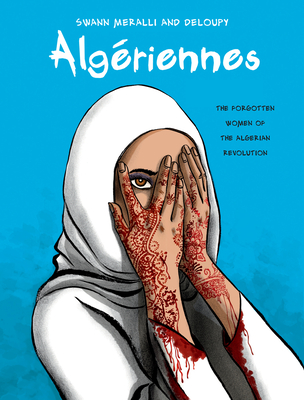 The Algerian War of Independence (1954-62), also known as the Algerian Revolution, was a messy and vicious conflict between France and the Algerian National Liberation Front. Waged primarily in Algeria, it severely traumatized citizens on both sides of the Mediterranean, and it continues to have a troubled legacy to this day. Inspired by real events, this poignantly narrated and beautifully illustrated graphic novel tells the story of this confrontation through female protagonists.

Alg riennes follows the investigative efforts of Beatrice, the daughter of a French-Algerian War veteran. Beatrice's father was never able to talk about what he had experienced during the war. Wanting to know more about this part of her family's history, Beatrice sets off on a voyage of discovery that eventually leads her to Algiers. Along the way, she meets women who recount their experiences during the war. Sa da was a child who made a harrowing escape with her family to France, only to end up in an internment camp. Djamila was a mujahidate rebel who fought alongside the men and witnessed firsthand the barbarity of war. Bernadette was a French woman who refused to leave Algeria after the conflict ended and was ostracized as a pied-noir. Malika was a terrorist bomber fighting on the side of the resistance. Over the course of the narrative, their stories intersect and complete one another, resulting in a powerful and moving picture of what both women and men lived through during the Algerian Revolution--and a clearer understanding of why these events have been, for so many, nearly impossible to discuss.