Anti-vaxxers: How to Challenge a Misinformed Movement (Paperback) 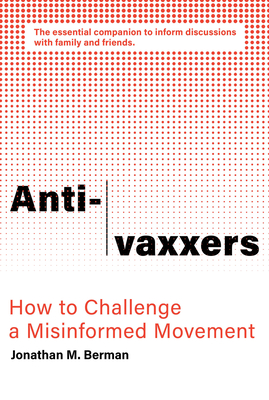 A history of the anti-vaccination movement, from its nineteenth-century antecedents to today's anti-vax activism, offering strategies for refuting its claims.

Vaccines are a documented success story, one of the most successful public health interventions in history. Yet there is a vocal anti-vaccination movement, featuring celebrity activists (including Kennedy scion Robert F. Kennedy Jr. and actress Jenny McCarthy) and the propagation of anti-vax claims through books, documentaries, and social media. In Anti-Vaxxers, Jonathan Berman explores the phenomenon of the anti-vaccination movement, recounting its history from its nineteenth-century antecedents to today's activism, examining its claims, and suggesting a strategy for countering them.

After providing background information on vaccines and how they work, Berman describes resistance to Britain's Vaccination Act of 1853, showing that the arguments anticipate those made by today's anti-vaxxers. He discusses the development of new vaccines in the twentieth century, including those protecting against polio and MMR (measles, mumps, rubella), and the debunked paper that linked the MMR vaccine to autism; the CDC conspiracy theory promoted in the documentary Vaxxed; recommendations for an alternative vaccination schedule; Kennedy's misinformed campaign against thimerosal; and the much-abused religious exemption to vaccination.

Anti-vaxxers have changed their minds, but rarely because someone has given them a list of facts. Berman argues that anti-vaccination activism is tied closely to how people see themselves as parents and community members. Effective pro-vaccination efforts should emphasize these cultural aspects rather than battling social media posts.

Jonathan M. Berman is Assistant Professor in the Department of Basic Sciences at NYITCOM–Arkansas. An active science communicator, he served as national cochair of the 2017 March for Science.

"Science professor Berman debuts with a useful guide for readers concerned about the opposition to vaccinations...The book’s greatest value comes from its insights into how common cognitive errors can lead even the well-informed to see false correlations between vaccination and health problems. Berman also provides practical suggestions about how best to engage, and potentially convert, vaccine opponents, arguing that 'people change their own minds; we can’t do it for them.' Given hopes for a Covid-19 vaccine, this accomplished exploration of a vexing topic couldn’t be more timely."
–Publishers Weekly

"Recommended for those countering the anti-vaccination movement, as well as those with an interest in cultural and historical antecedents of the movement."
–Library Jounal


"This accessible and informative book provides not only a rational analysis of the many sources of anti-vaccine thinking, but also practical ideas that can be used to overcome objections against vaccines."
–CHOICE

“Berman, an assistant professor of basic science at an osteopathic medical school, explores the history of anti-vaccine movements and how best to counter them. Such movements, he finds, share beliefs and features: wariness of government control, distrust of the medical establishment and its products, false claims about vaccines (often made by people with economic interests), and unfounded fears of harm, spread by misinformation and social media. Those most vulnerable to such claims are often parents trying to decide what is best for their children’s health. Rather than learning from reliable sources why childhood vaccines are necessary to protect both individuals and the population as a whole from infections, they may receive unreliable information from others in their community who oppose vaccination...Berman’s advice on how to talk with people who are uncertain about vaccinating their children is enlightening and practical.”
–the Washington Post Book World

"Anti-vaxxers is a book that reminds us of the historical precedents to the odd alliances — anti-vaccine, anti-mask, anti-5G, for instance — that are getting in the way of public health right now...By taking the story of vaccine opposition back to its earliest examples, Anti-vaxxers cautions against simplistic solutions. In tracing the movement across three centuries, Berman underlines that is unlikely to be ended by keyboard warriors or the repetition of even the best scientific evidence." –Nature

"Written by one of the founders of the ‘March for Science’ movement, Anti-vaxxers is a tour-de-force examination of anti-vax arguments that is destined to become a classic in the field. Before you get into another argument with an anti-vaxxer, simply pull this book off the shelf, hand it to them, and say ‘here.’"
– Lee McIntyre, Research Fellow, Center for Philosophy and History of Science, Boston University; author of Post-Truth and The Scientific Attitude

"In Anti-Vaxxers, Jonathan Berman reveals the strategies, influence, and psychology of a movement that the World Health Organization has called one of the top ten threats to global health. An urgent and engaging read."
– Paul A. Offit, Professor of Pediatrics, the Children’s Hospital of Philadelphia; author of Overkill: When Modern Medicine Goes Too Far