The Computer Boys Take Over: Computers, Programmers, and the Politics of Technical Expertise (History of Computing) (Paperback) 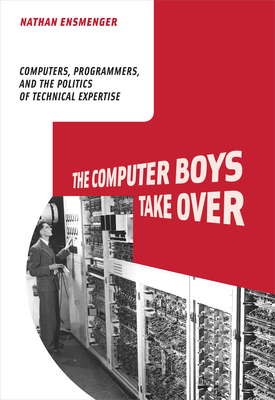 The contentious history of the computer programmers who developed the software that made the computer revolution possible.

This is a book about the computer revolution of the mid-twentieth century and the people who made it possible. Unlike most histories of computing, it is not a book about machines, inventors, or entrepreneurs. Instead, it tells the story of the vast but largely anonymous legions of computer specialists—programmers, systems analysts, and other software developers—who transformed the electronic computer from a scientific curiosity into the defining technology of the modern era. As the systems that they built became increasingly powerful and ubiquitous, these specialists became the focus of a series of critiques of the social and organizational impact of electronic computing. To many of their contemporaries, it seemed the “computer boys” were taking over, not just in the corporate setting, but also in government, politics, and society in general.

In The Computer Boys Take Over, Nathan Ensmenger traces the rise to power of the computer expert in modern American society. His rich and nuanced portrayal of the men and women (a surprising number of the “computer boys” were, in fact, female) who built their careers around the novel technology of electronic computing explores issues of power, identity, and expertise that have only become more significant in our increasingly computerized society.

In his recasting of the drama of the computer revolution through the eyes of its principle revolutionaries, Ensmenger reminds us that the computerization of modern society was not an inevitable process driven by impersonal technological or economic imperatives, but was rather a creative, contentious, and above all, fundamentally human development.

Nathan Ensmenger is Associate Professor in the School of Informatics and Computing at Indiana University.

...Ensmenger has crafted an orderly and well organized argument that the dynamics of managing computer firms have often been as complex as the subject matter itself... In this important way, The Computer Boys Take Over is learned, well-documented with citations, and often humorous—with numerous period cartoons and company advertisements that nicely support the text. Such a study of computing's early and arguably most important years, is long overdue.—High Tech History blog—