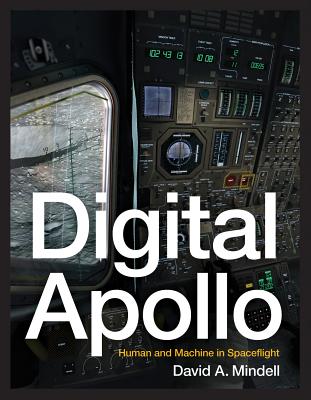 How human pilots and automated systems worked together to achieve the ultimate in flight--the lunar landings of NASA's Apollo program.

As Apollo 11's Lunar Module descended toward the moon under automatic control, a program alarm in the guidance computer's software nearly caused a mission abort. Neil Armstrong responded by switching off the automatic mode and taking direct control. He stopped monitoring the computer and began flying the spacecraft, relying on skill to land it and earning praise for a triumph of human over machine. In Digital Apollo, engineer-historian David Mindell takes this famous moment as a starting point for an exploration of the relationship between humans and computers in the Apollo program. In each of the six Apollo landings, the astronaut in command seized control from the computer and landed with his hand on the stick. Mindell recounts the story of astronauts' desire to control their spacecraft in parallel with the history of the Apollo Guidance Computer. From the early days of aviation through the birth of spaceflight, test pilots and astronauts sought to be more than "spam in a can" despite the automatic controls, digital computers, and software developed by engineers.

Digital Apollo examines the design and execution of each of the six Apollo moon landings, drawing on transcripts and data telemetry from the flights, astronaut interviews, and NASA's extensive archives. Mindell's exploration of how human pilots and automated systems worked together to achieve the ultimate in flight--a lunar landing--traces and reframes the debate over the future of humans and automation in space. The results have implications for any venture in which human roles seem threatened by automated systems, whether it is the work at our desktops or the future of exploration.

David A. Mindell is Dibner Professor of the History of Engineering and Manufacturing, Professor of Engineering Systems, and Director of the Program in Science, Technology, and Society at MIT. He is the author of Between Human and Machine: Feedback, Control, and Computing before Cybernetics and War, Technology, and Experience aboard the USS Monitor.