Quantum Computing for Everyone (Hardcover) 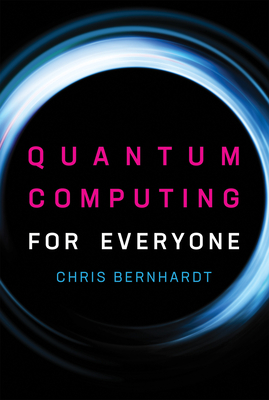 An accessible introduction to an exciting new area in computation, explaining such topics as qubits, entanglement, and quantum teleportation for the general reader.

Quantum computing is a beautiful fusion of quantum physics and computer science, incorporating some of the most stunning ideas from twentieth-century physics into an entirely new way of thinking about computation. In this book, Chris Bernhardt offers an introduction to quantum computing that is accessible to anyone who is comfortable with high school mathematics. He explains qubits, entanglement, quantum teleportation, quantum algorithms, and other quantum-related topics as clearly as possible for the general reader. Bernhardt, a mathematician himself, simplifies the mathematics as much as he can and provides elementary examples that illustrate both how the math works and what it means.

Bernhardt introduces the basic unit of quantum computing, the qubit, and explains how the qubit can be measured; discusses entanglement--which, he says, is easier to describe mathematically than verbally--and what it means when two qubits are entangled (citing Einstein's characterization of what happens when the measurement of one entangled qubit affects the second as "spooky action at a distance"); and introduces quantum cryptography. He recaps standard topics in classical computing--bits, gates, and logic--and describes Edward Fredkin's ingenious billiard ball computer. He defines quantum gates, considers the speed of quantum algorithms, and describes the building of quantum computers. By the end of the book, readers understand that quantum computing and classical computing are not two distinct disciplines, and that quantum computing is the fundamental form of computing. The basic unit of computation is the qubit, not the bit.