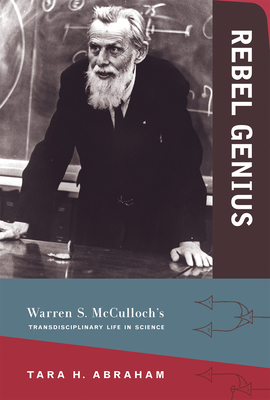 The life and work of a scientist who spent his career crossing disciplinary boundaries—from experimental neurology to psychiatry to cybernetics to engineering.

Warren S. McCulloch (1898–1969) adopted many identities in his scientific life—among them philosopher, poet, neurologist, neurophysiologist, neuropsychiatrist, collaborator, theorist, cybernetician, mentor, engineer. He was, writes Tara Abraham in this account of McCulloch's life and work, “an intellectual showman,” and performed this part throughout his career. While McCulloch claimed a common thread in his work was the problem of mind and its relationship to the brain, there was much more to him than that. In Rebel Genius, Abraham uses McCulloch's life as a window on a past scientific age, showing the complex transformations that took place in American brain and mind science in the twentieth century—particularly those surrounding the cybernetics movement.

Abraham describes McCulloch's early work in neuropsychiatry, and his emerging identity as a neurophysiologist. She explores his transformative years at the Illinois Neuropsychiatric Institute and his work with Walter Pitts—often seen as the first iteration of “artificial intelligence” but here described as stemming from the new tradition of mathematical treatments of biological problems. Abraham argues that McCulloch's dual identities as neuropsychiatrist and cybernetician are inseparable. He used the authority he gained in traditional disciplinary roles as a basis for posing big questions about the brain and mind as a cybernetician. When McCulloch moved to the Research Laboratory of Electronics at MIT, new practices for studying the brain, grounded in mathematics, philosophy, and theoretical modeling, expanded the relevance and ramifications of his work. McCulloch's transdisciplinary legacies anticipated today's multidisciplinary field of cognitive science.

Tara H. Abraham is Associate Professor in the Department of History at the University of Guelph, Ontario.

Through its discussions of McCulloch in the round, Rebel Genius is an excellent portrait of the man and his time, and a significant contribution to the history of science.—Nature—

Abraham's biography of McCulloch brings to life a fascinating group of individuals and the era in which they lived.