The Diesel That Did It: General Motors' FT Locomotive (Railroads Past and Present) (Hardcover) 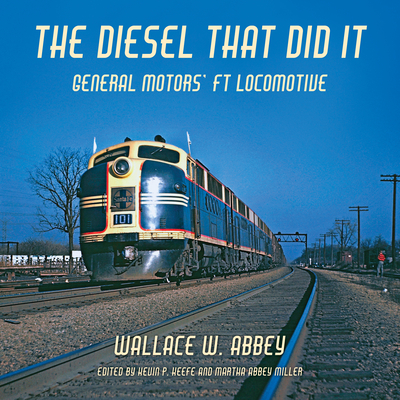 The Diesel That Did It tells the story of the legendary diesel-electric locomotive, the FT.
As war loomed in 1939, American railroads were on the precipice of railroad transformation. In an obscure factory in La Grange, Illinois, a group of gifted engineers and designers were planning a revolution that would shake railroading to its foundations and eventually put the steam locomotive out of business. Their creation, the FT, was a diesel-electric, semi-streamlined freight engine. The FT would establish a new standard for reliability, flexibility, and cost, but its arrival unsettled many railroad employees and gave fresh ammunition to their labor unions, who believed that it threatened a century-old culture.

Wallace W. Abbey's The Diesel That Did It is the story of a revolution. He explores how EMC (and its successor Electro-Motive Division of General Motors) conceived the FT, and how it ultimately emerged as the dominant locomotive power plant for 20 years. However, for Abbey, the history of the Santa Fe Railway and the FT go hand in hand. The Diesel That Did It also offers a penetrating look at how the great American railroad, at the height of its Super Chief glamor, threw its conservative mechanical traditions aside to bet big on the diesel.

Showcasing more than 140 exquisite photographs by Abbey and other noted photographers, The Diesel That Did It is a captivating story not to be missed by railroaders and railfans.

Wallace W. Abbey (1927-2014) spent his career as a railroad journalist and public relations executive, primarily in the Upper Midwest. His combined writing and photographic skills documented well the dynamic railroad landscape from the 1940s through the 1980s. Although Wally never worked for the Santa Fe, it was his favorite railroad, in part because of its 100-class diesel-electrics.Martha Abbey Miller inherited from her father, Wally Abbey, a love of both railroads and the written word. Following a career in communications management, she is a writer, editor, dramatist, and the author of several nonfiction books. Martha is a member of the board of directors of Haiti Healthcare Partners. She lives in Prescott, Arizona.Kevin P. Keefe is a Milwaukee-based journalist, former editor and publisher of Trains magazine, and author of Twelve Twenty-five: The Life and Times of a Steam Locomotive, winner of a 2017 Notable Book Award from the Library of Michigan. Kevin continues to write for railroad publications and is also a member of the board of directors of the Center for Railroad Photography & Art.