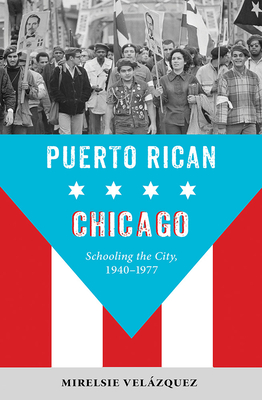 The postwar migration of Puerto Rican men and women to Chicago brought thousands of their children into city schools. These children's classroom experience continued the colonial project begun in their homeland, where American ideologies had dominated Puerto Rican education since the island became a US territory. Mirelsie Velázquez tells how Chicago's Puerto Ricans pursued their educational needs in a society that constantly reminded them of their status as second-class citizens. Communities organized a media culture that addressed their concerns while creating and affirming Puerto Rican identities. Education also offered women the only venue to exercise power, and they parlayed their positions to take lead roles in activist and political circles. In time, a politicized Puerto Rican community gave voice to a previously silenced group--and highlighted that colonialism does not end when immigrants live among their colonizers.

A perceptive look at big-city community building, Puerto Rican Chicago reveals the links between justice in education and a people's claim to space in their new home.

Mirelsie Velázquez is an associate professor of education at the University of Oklahoma.

"Puerto Rican Chicago: Schooling the City, 1940-1977 is an essential contribution to the growing scholarship on Latinos in the Midwest. It powerfully chronicles the persistent efforts of the Puerto Rican community, especially women, to advocate for their children's right to a meaningful education and a more promising future. Meticulously researched and eloquently written, Mirelsie Velázquez' book is a must read for those interested in community-based activism, education, urban history, and Puerto Rican and Latino studies."--Lourdes Torres, author of Puerto Rican Discourse: A Sociolinguistic Study of A New York Suburb